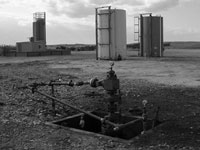 As the oil industry spent record amounts on lobbying in Sacramento and made record profits, documents obtained by the Center for Biological Diversity reveal that almost 3 billion gallons of oil industry wastewater were illegally dumped into Central California aquifers that supply drinking water and irrigation water for farms.

The documents also reveal that Central Valley Regional Water Quality Board testing found high levels of arsenic, thallium and nitrates, contaminants sometimes found in oil industry wastewater, in water-supply wells near these waste-disposal operations. The illegal dumping took place in a state where Big Oil is the most powerful corporate lobby and the Western States Petroleum Association (WSPA) is the most powerful corporate lobbying organization, alarming facts that the majority of the public and even many environmental activists are not aware of.

An analysis of reports filed with the California Secretary of State shows that the oil industry collectively spent over $63 million lobbying California policymakers between January 1, 2009 and June 30, 2014.