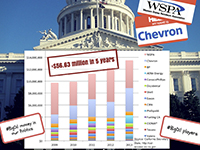 California is a state where many powerful corporate interests are based, ranging from corporate agribusiness in the San Joaquin Valley to the computer and technology industry in the Silicon Valley, but none are more influential in state politics than the oil industry. Stop Fooling California recently released a chart revealing that the oil industry, including the Western States Petroleum Association, Chevron, BP and other oil companies, spent over $56.63 million on lobbying at the State Capitol in the five years from 2009 through 2013.

This money amounts to an average of $471,000 for each California Senator and Assemblymember, according to the organization (http://www.stopfoolingca.org ), "an online and social media public education and awareness campaign that highlights oil companies’ efforts to mislead and confuse Californians." The money spent by Big Oil on lobbying has apparently been a very good investment, since the industry was able to make sure that the only fracking legislation passed by the Legislature and signed by the Governor last year was Senator Fran Pavley’s SB 4, the“green light for fracking bill." SB 4 is an ominous piece of legislation that will result in the expansion of hydraulic fracturing in Kern County, coastal areas and offshore waters.