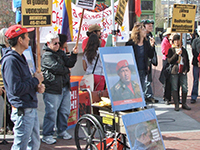 Jonathan Nack writes: Sensational reporting on opposition protests in Venezuela has been featured by the corporate mainstream media over the past three weeks. There are accounts of repression of protesters who are calling for the “exit” of President Nicholas Maduro because of rising inflation, rampant crime, shortages of consumer goods, and mismanagement of the economy to the point of collapse. Eighteen people have been reported to have been killed in connection with the protests. The government, and government aligned “colectivo” thugs are blamed. The mainstream media's narrative is that the Venezuelan government has caused this crisis, because it is a dictatorship that has ruined Venezuela's economy in a failed attempt to impose Cuban style socialism. Slowly, alternative narratives which challenge the mainstream media's accounts of current events and their context, are emerging from the internet, some journalists, and grassroots solidarity activists.

A small group of such activists gathered for an emergency street rally in the heart of San Francisco's Latino community, the 24th Street and Mission Street BART Plaza, on February, 17, 2014. The rally was called to protest the one-sided media coverage of events unfolding in Venezuela; to denounce plots to destabilize the Venezuelan government and economy in an attempt to precipitate a U.S. backed coup; and to express solidarity with the Venezuelan based international Bolivarian revolutionary movement.

The Center for Political Education organized a report back by Carolina Morales about her recent visit. The March 6 event also commemorated the one year anniversary of the death of President Hugo Chavez.

S.F. Rally in Solidarity with Venezuela and the Bolivarian Process |