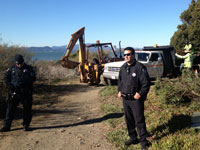 On December 9, which was one of the coldest days of the season, the eviction of the Albany Bulb began. Workers from the City of Albany's Department of Public Works used a backhoe to dismantle homes located at the autonomous wild space where people have lived and created art for decades. Bulb residents' belongings were thrown in dump trucks behind the lines of Albany police.

Community members attempted to defend the Bulb by blocking work crews from destroying homes and possessions, and a variety of legal representatives were present, encouraging residents not to sign any papers without an attorney present. Despite clear evidence to the contrary, authorities claimed the camps were "empty" and that they had resident's permission to proceed.

Autonomous Anarchist writes: "The supposedly empty camp has a sign in the door reading 'This camp is not abandoned. –Kris S.' Disregarding this, the police walk in and call to the city workers to follow them upon determining that no one is inside. The house is built into a tree on the side of a hill and is almost invisible until you stand in the entrance, from which you can see a set of stairs leading to the main platform, a storage area to the right of the entrance, and various belongings tucked away under tarps within the ground-scraping canopy of the tree. 'There’s nothing of value here' a worker calls out. At this point it began to become clear that these workers had successfully repressed any signs of compassion or understanding for the lives of Bulb residents, as it was clear that there were belongings in this dwelling that had value to its residents."

Read More with Photos | Into the Cold: Evictions at the Albany Bulb |

No Thanks Resistance Festival this weekend at the Albany bulb! (11/28) | Barricades and Encampment Erected at Albany Bulb to Halt Eviction |