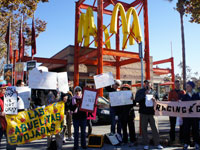 Lively protests took over McDonald's restaurants in the Bay Area on December 5 as part of a nationwide series of actions organized by Fast Food Forward, a joint effort by community and labor groups led by Service Employees International Union (SEIU). Demonstrations were planned for over one hundred cities. The rallies demanded a $15 an hour minimum wage for fast-food workers.

In Oakland, the rally was mobilized for by East Bay Up the Pay, and was supported by labor groups such as SEIU Local 1021 and the East Bay Alliance for a Sustainable Economy (EBASE), and community groups such as the Oakland chapter of the Alliance of Californians for Community Empowerment (ACCE). Young workers celebrated and danced as much as they protested. They appeared excited to be coming together to organize.

A raucous rally in San José in front of the McDonald's on W. San Carlos drew dozens including union members from the Brotherhood of Electrical Workers, Industrial Workers of the World, and Service Employees International Union. Customers exiting the restaurant stopped to thank some of the demonstrators for their concern for employees.

Low Pay is NOT Okay: Protest in front of McDonald's in San José