by Jonathan Nack
Young workers celebrated and danced as much as they protested. They appeared excited to be coming together to organize.

Photo by Jonathan Nack
Protest at MCDonalds in Oakland for $15 minimum wage
December 5, 2013 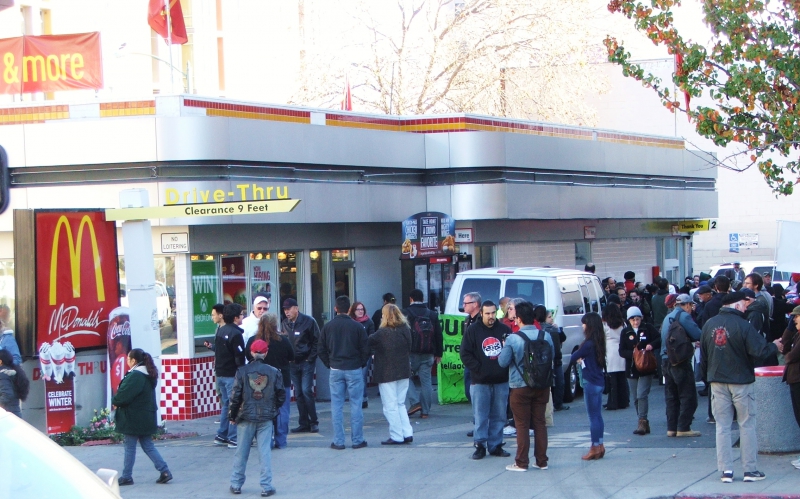 OAKLAND – A lively protest took over the parking lot of a McDonalds restaurant on Jackson Street in downtown Oakland today. The rally, which completely blocked the restaurant's drive through, demanded a $15 an hour minimum wage for fast-food workers.

Young workers celebrated and danced as much as they protested. They appeared excited to be coming together to organize.

The rally was part of a day of nationwide actions at McDonalds restaurants across the country. A reporter for the New York Times, Steven Grteenhouse, decribed today's actions as, “the biggest wave of job actions in the history of America’s fast-food industry.” [ http://www.nytimes.com/2012/11/30/nyregion/fast-food-workers-in-new-york-city-rally-for-higher-wages.html ]

The nationwide actions were organized by Fast Food Forward, [ http://fastfoodforward.org/ ] a a joint effort by labor and community groups led by Service Employees International Union (SEIU). Demonstrations were planned for over one hundred cities.

In Oakland, the rally was mobilized for by East Bay Up the Pay, and was supported by labor groups such as SEIU Local 1021 and the East Bay Alliance for a Sustainable Economy (EBASE)
[ http://workingeastbay.org/ ]; and community groups such as the Oakland chapter of the Alliance of Californians for Community Empowerment (ACCE) [ http://www.calorganize.org/ ]

Despite the fact that the rally completely blocked the restaurant's drive through for more than an hour, police never came to clear it.

Fast Food Forward released a report on October 15, 2013 entitled, “The Public Cost of Low-wage Jobs in the Fast-Food Industry.” Among the report's findings were:

• Compared to the overall economy, fast-food jobs are twice as likely as other jobs to pay so little that workers are forced to rely on public assistance (52% versus 25%);

• Full-time jobs in the corporate fast-food industry do not pay enough for workers to get by. Even at 40 hours a week, more than half of front-line fast-food workers are forced to rely on public assistance to cover basic needs like food, rent and healthcare; and

• 67% of core front-line fast-food workers are adults 20 and older, and 68% are the main earners in their families. More than one-quarter are raising children.” [ http://fastfoodforward.org/wordpress/wp-content/uploads/2013/10/Cost-Fast-Food-Report-FINAL.pdf ]

§The rally completely blocked the drive thru.
by Jonathan Nack 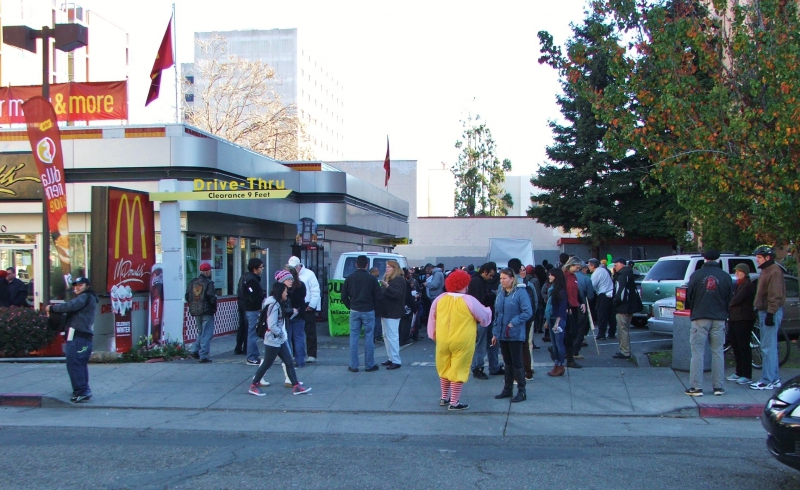 §Crowd at rally 1
by Jonathan Nack 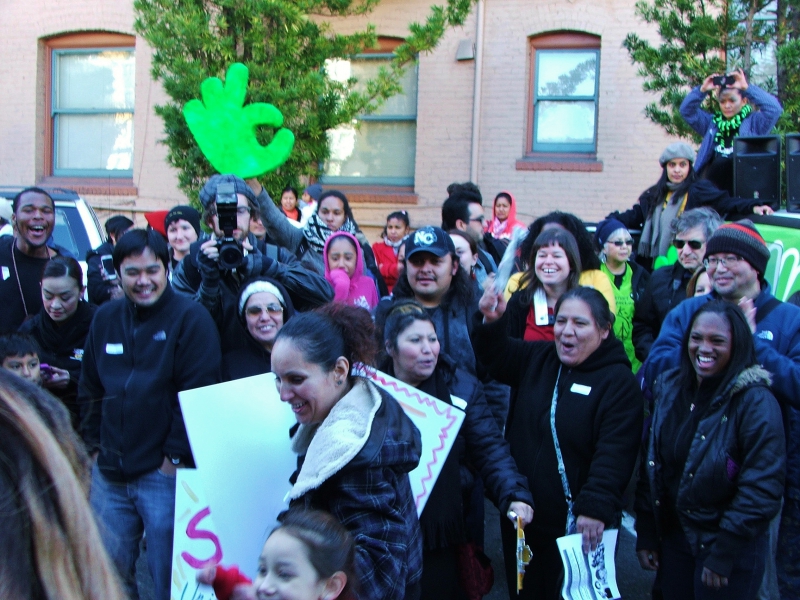 §Crowd at rally 2
by Jonathan Nack 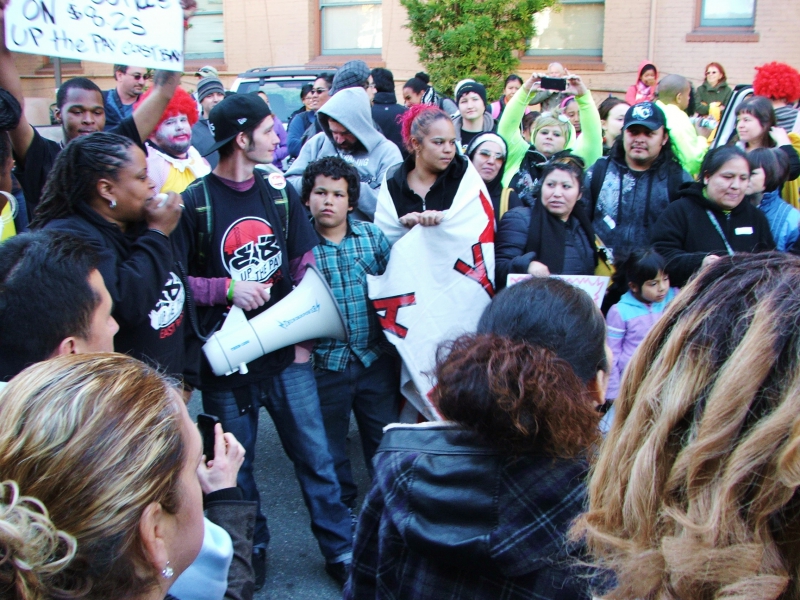 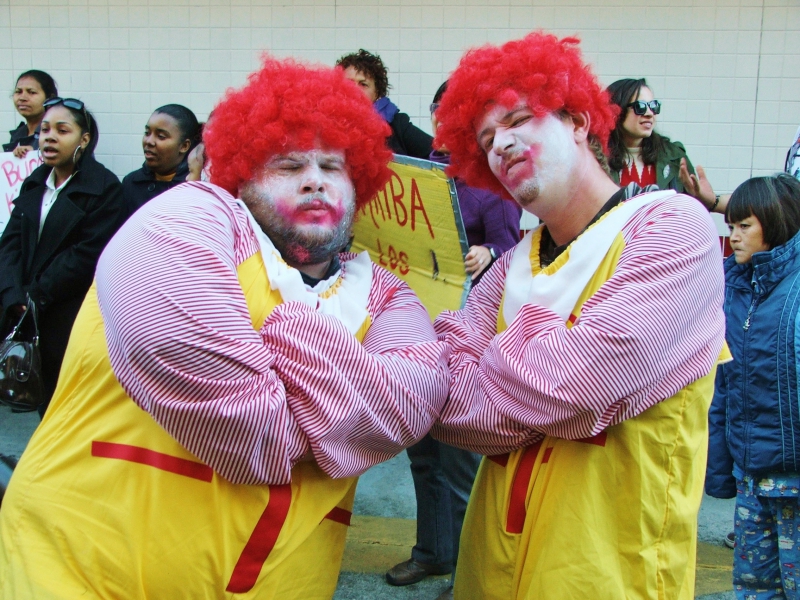 Add Your Comments
Latest Comments
Listed below are the latest comments about this post.
These comments are submitted anonymously by website visitors.
TITLE
AUTHOR
DATE
painting Ronald black
side story
Protest Rocks Oakland MacDonaldsA
Jonathan Nack
thank you!
reporter at large
Support Independent Media
We are 100% volunteer and depend on your participation to sustain our efforts!