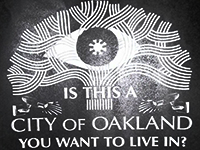 The Domain Awareness Center, a joint project between the Port of Oakland and the city, started as a nationwide initiative to secure ports by networking sensors and cameras in and around the facilities. Since its inception in 2009, the project has ballooned into a surveillance program for the entire city. Some officials already have proposed linking the center to a regional Department of Homeland Security intelligence-gathering operation or adding feeds from surveillance cameras around the Oakland stadium and arena complex. Linda Lye, an attorney with the American Civil Liberties Union of Northern California who led protests against the Alameda County sheriff’s proposed purchase of an aerial drone this year, called the Oakland surveillance center “a classic illustration of mission creep.”

The Oakland Domain Awareness Center currently does not have privacy guidelines or limits for retaining the data it collects, raising concerns from civil libertarians and privacy advocates. Eighteen license-plate readers mounted on Oakland police vehicles and city infrastructure already collect and retain millions of license-plate records. As planned, the center would integrate computer dispatch systems for the Oakland police and fire departments, gunshot detection microphones and license-plate readers. It includes use of crime mapping software and stationary video cameras, private alarm detection programs, Twitter feeds, news feeds and other alerts. Eventually, it could be adapted to include facial recognition software.

Civil liberties advocates intend to make a stand against the program at the Oakland City Council meeting on July 30. They are calling for opponents of city-wide surveillance to come to the City Council Meeting to speak out against the expansion of the Domain Awareness Center beyond the Port of Oakland. They ask supporters to "Come and speak at the public hearing or just fill the chambers and support your neighbors who want to preserve the 4th Amendment and stop the police state from growing."