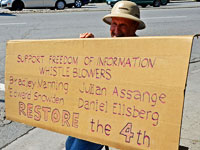 Demanding Freedom from the National Security State on the Fourth of July
On Independence Day, Santa Cruzans Show Support for Whistleblowers Manning and Snowden

At this year's Fourth of July anti-war demonstration in Santa Cruz, community members called for the release of all political prisoners, including Bradley Manning, Lynne Stewart, and Edward Snowden. The event is held annually at the corner of Ocean and Water Street, and the throng of holiday traffic rolling by slowly, bumper to bumper, was greeted this year with protest signs bearing messages of opposition to the expansion of security culture in the United Sates.

Organizers created a series of themed protest signs inscribed with messages correlating the reduced liberties of Americans domestically to corporate rule, and the deadly wars the United States is involved with abroad. Local activists also displayed their collection of placards containing the names and ages of over one hundred children killed by U.S. drones in Pakistan and Yemen. Listed on another sign was an overall estimate for the civilian death count from drones in Pakistan. That number of named individuals identified "so far" is 317.