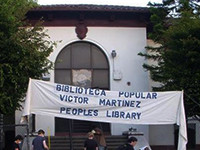 The historic building at 1449 Miller Avenue was unveiled on the morning of August 13th as the Victor Martinez Community Library. Originally, it was part of a Carnegie Foundation endowment of four libraries given to the city of Oakland between 1916 and 1918. Oakland’s librarian at the time, Charles S. Greene, believed that the city’s people would benefit most from libraries placed within their communities. Despite this vision, the building was one of seven branch casualties of budget cuts in the late seventies. In 1978, the Emiliano Zapata Street Academy merged with the East Oakland Street Academy and moved to the Miller Library location until 1988 when the Street Academy moved to a new location. Since then, the “Latin American Branch” library has mostly sat empty

The building has been renamed after recently deceased author, Victor Martinez, who overcame a young life of hard agricultural work in the Central Valley to become a successful writer in the Bay Area. His semi-autobiographical novel, "Parrot in the Oven", has become a seminal work of the Latino experience. Martinez died last year at 56 of an illness caused by his work in the fields.

On the first day, as garbage was cleared from the grounds and the building was cleaned, donations of books poured in and area children helped to start a community garden in a side lot. Occupy Oakland sponsored a potluck dinner before a speak-out in the evening.

In less than 15 hours after it's grand opening, however, OPD and the City Administrators Office deemed the occupation illegal and promptly raided the Community Library. During the raid, city workers and more than 30 police officers boarded up the entrance and sealed the fence; leaving activists and onlookers with piles of books, food, and cleaning supplies.

The next morning, activists re-opened the library on the sidewalk in front of the building. It has been growing since and includes a garden created by neighborhood children.

Audio Report from the Victor Martínez Popular Library in Oakland |