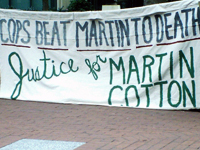 Redwood Curtain CopWatch writes: The current civil rights trial in Oakland about the Eureka police murder of Martin Frederick Cotton II resumes Wednesday, September 21st. Four years ago, Martin was 26 years old, unarmed and living on the streets when he was killed by the Eureka Police when they pummeled his body in broad daylight, in front of a homeless shelter (Eureka Rescue Mission), then brought him to the jail to die. Cotton family supporters who are deeply opposed to police violence, rallied in front of the Oakland courthouse on the first day of trial (Sept 12) and have been present in the courtroom while attorneys Vicki Sarmiento and Dale Galipo represent Martin's six year old daughter, Siehna, and her grandfather, Martin Cotton Sr. The case, Siehna Cotton et al v. City of Eureka is being heard before U.S. District Court Judge Saundra Brown Armstrong and a seven person jury. Martin's story has spread beyond the “Redwood Curtain”.

Marty Cotton, Sr. says, “We want to expose the truth, ideally, so those cops can never wear a badge and weaponry and never do this to anyone else again.” One consistent observer of the trial said “The cops are claiming that they pepper-sprayed Martin, got on top of him and beat him repeatedly, even with a metal baton, just to get Martin's hands out from under him. It is absurd, or more accurately, obscene...and it killed him.” Also, the officers testified that they did not think Martin was hurt and did nothing to get him checked out or treated — after “exhausting” themselves beating and spraying him. A video of Martin dying in the jail cell was shown at trial.

A press conference was held September 21st, in front of the Federal Building in Oakland.