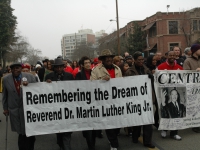 Fresno MLK Day 2011
An Anti-War Speech, a Strange Pronouncement by the Police Chief, and More...

About 650 people marched to honor Martin Luther King in downtown Fresno on Monday, January 17, 2011. When the march stopped at Fresno City Hall, elected officials and a couple of community activists spoke. Newly elected Fresno City Council member Clint Olivier spoke out strongly against the war in Iraq and Afghanistan.

Olivier’s speech was followed by Fresno Police Chief Jerry Dyer, who described himself as “God’s Minister of Justice as described in the bible.” Dyer has been criticized by Fresno’s progressive community for not restraining officers in his force who have shot numerous unarmed suspects. His pronouncement that he was God’s Minister of Justice was met by gasps from those on the left and some applause by those in the religious community.

Fresno mayor Ashley Swearengin and Allied Waste were both listed as sponsors of the MLK Day events. This was controversial to union members who participated in the march because Swearengin and Allied have proposed privatizing Fresno’s commercial solid waste operations. Privatization would lower wages and benefits for workers.