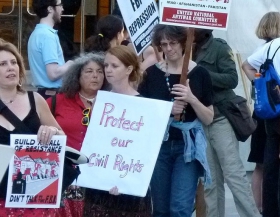 On the morning of September 24th, FBI agents served grand jury subpoenas and raided the homes of several anti-war and social justice activists in Minnesota, Michigan and Illinois. Eight people were issued subpoenas to appear before a federal grand jury in Chicago. The FBI appears to be targeting people associated with the Freedom Road Socialist Organization and the Arab-American Action Network.

A protest took place in San Francisco on Tuesday, September 28th starting at 5pm at the Federal Building at 7th St. and Mission St.

Search warrants indicate agents were looking for connections between local antiwar activists and groups in Colombia and the Middle East. Most of the people whose homes were searched or who were issued subpoenas had helped organize or attended protests at the Republican National Convention in St. Paul, Minnesota, two years ago.

The federal law cited in the search warrants prohibits, "providing material support or resources to designated foreign terrorist organizations." In June, the Supreme Court rejected a free speech challenge to the material support law from humanitarian aid groups. Under the law, individuals can face up to 15 years in prison for providing "material support" to groups designated by the US government as terrorists, even if their work is intended to promote peaceful, lawful objectives. "Material support" is defined to include any "service," "training," "expert advice or assistance" or "personnel." Groups listed in the warrants are Hezbollah, the Popular Front for the Liberation of Palestine, and the Revolutionary Armed Forces of Colombia, or FARC. The warrants also authorized agents to seize items such as electronics, photographs, videos, address books and letters.

The raids come on the heels of a Justice Department probe that found the FBI improperly monitored activist groups and individuals from 2001 to 2006. Among the groups investigated were Greenpeace, People for the Ethical Treatment of Animals (PETA), Catholic Worker and the Thomas Merton Center, a pacifist group based in Pittsburgh.

Houses Raided, Activists Subpoenaed in National FBI "Terror" Expedition | Anti-War Activists Under Attack in Nation's Heartland | FBI ATTACKS Activists and WHAT is our response | Don't F*ck With Our Activists | Raid on a Nation | The New York Times and the FBI raids