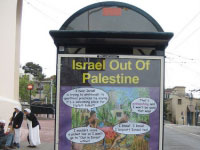 Queers who support human rights protested outside the Roxie Theater on Thursday, April 8th, the opening night of the Out In Israel LGBT Cultural Festival. Out in Israel is a marketing event series aimed at convincing LGBT people in the U.S. that Israel is a cool, progressive, gay-friendly country. This is all part of a public relations scheme by supporters of Israel in this country to repair an image tarnished by atrocities, such as its massacres in Gaza last year.

A recent report by a leading Israeli think tank, alleges that the “deligitimization challenge” to Israel’s policies of apartheid and ethnic cleansing radiates out from “hubs,” including the Bay Area. Out in Israel is the first salvo in this new propaganda war, and if last week’s film night was any indication, it’s not having much success. Only about 50 people showed up for the films.

Queers Undermining Israeli Terrorism (QUIT!) called the action, which featured a skit called “Queer Eye for the Palestinian Village.” A couple Queer Guys were called in to give a makeover to a West Bank village so it could be turned into a queer-friendly Jewish settlement. Just rip out those unsightly olive trees, get a Caterpillar bulldozer to get rid of that mosque — so over — and you’ll have a perfect view of Tel Aviv and a great square for nude sunbathing. Oh, but you’ll need some hot Israeli soldiers to come in and kill all the people who are living there.