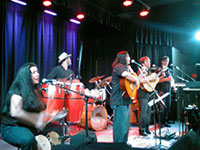 On March 27th, a birthday party was held to celebrate 15 years of Free Radio Santa Cruz. The party took place at the Kuumbwa Jazz Center in downtown Santa Cruz. The night featured local musicians and brought together past and present station programmers, as well as other community members. In addition to the local musicians, Tom Lodge, a pirate radio legend and pioneer from England, spoke of the great days of Radio Caroline, which allowed for the British Invasion. Lodge recently penned a book called The Ship That Rocked The World: How Radio Caroline Defied the Establishment, Launched the British Invasion, and Made the Planet Safe for Rock and Roll.

Free Radio Santa Cruz (FRSC) is a collectively run, community supported, Do It Yourself (DIY) radio station broadcasting at 101.1 FM and streaming online at freakradio.org. FRSC writes, "We do not accept commercial advertising, sponsors, patrons or underwriting. We don't do 'pledge drives.' We feature independent news, public affairs, and music programming in English and Spanish. We have a policy against 'hate speech' while encouraging a wide variety of community opinion and commentary. We recruit and train members of the community to express themselves and speak for their community on radio."