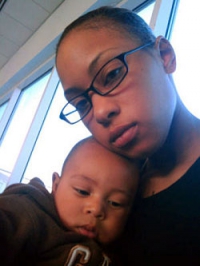 Alexis Hutchinson, a Single Mother from Oakland, Is Facing a Year in Military Prison
Oakland Mother Being Tried for Refusing to Leave Son and Go to Afghanistan

Update 2/11: Hutchinson wins discharge.
Alexis Hutchinson, a single mother from Oakland, CA, is facing up to a year in military prison for refusing to leave her son in Georgia foster care while being deployed to Afghanistan.

Despite assurances by military public affairs officers that the Army would work with Spc. Hutchinson and her attorneys to resolve the matter administratively, rather than through the criminal process, charges of missing movement, AWOL, dereliction of duty, and insubordinate conduct were filed on January 13th.

Spc. Hutchinson is a 21-year-old native of Oakland, CA, now facing over three years in prison, a dishonorable discharge, and the loss of custody of her infant. She has been assigned to Hunter Army Airfield near Savannah, GA, since February 2008.

Military objector support group Courage to Resist is raising funds for Hutchinson's defense and circulating a petition on its website to demand that charges be dropped. Read more