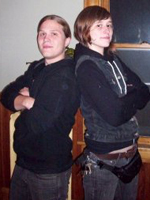 On October 13th, two Minneapolis activists were subpoenaed to appear before an Iowa Grand Jury, ostensibly investigating a November 2004 Animal Liberation Front raid of a University of Iowa psychology department animal laboratory. On October 15th, 2009, both Carrie Feldman and Scott DeMuth refused to testify before the Grand Jury. Carrie Feldman concluded her remarks to the Grand Jury on October 15th as such: "Today my voice may waver, as I stand alone in this room. But I know I speak with the voice of every one of my friends, loved ones, and comrades when I say this: We will not be intimidated. We will not cooperate. I have nothing more to say to you."

Last Tuesday, November 17th, both again refused to testify and were then ordered jailed for contempt by a federal district judge. On that charge, they stand to remain in jail for up to 11 months until the Grand Jury completes its term. On Thursday, November 19th, Minneapolis grand jury resister Scott DeMuth was additionally charged with conspiracy to commit animal enterprise terrorism in Davenport, Iowa federal court. This is the third time activists have now been charged under the AETA, all of whom have been charged in 2009.