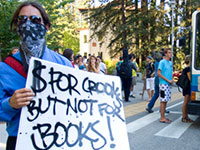 Public Forum on the UC's Financial Sources & Priorities
Forum to Include Robert Meister, Author of "They Pledged Your Tuition"

Two of the featured speakers have been particularly devoted to investigating the University of California's finances. Stanton Glantz of UCSF, is the author of The Cigarette Papers, which has played a key role in the ongoing litigation surrounding the tobacco industry. He is now working with the Keep California's Promise, an organization to restore the Master Plan for higher education, and has turned his investigative skills to the administration and financing of the UC.

Robert Meister is the President of the Council of University of California Faculty Associations (CUCFA) and director of the Bruce Center for Rethinking Capitalism at UCSC. For a decade he has been an active critic of the privatization trend at UC and an advocate of the shared governance tradition. His open letter to UC students "They Pledged Your Tuition" and subsequent writings have been widely circulated. Read more