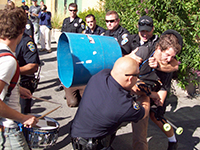 On September 17th, Jack and Wes were arrested at a gathering in Parking Lot #4 alongside the Santa Cruz Farmer's Market. According to reports published on Santa Cruz Indymedia, police initially went after and arrested Jack, a Food Not Bombs volunteer. Some people followed the police while drumming and demanding that Jack be released. Police reacted by arresting Wes, a drummer with Santa Cruz Trash Orchestra.

Numerous police were called to the scene, but they quickly left after displaying batons and a riot control gun. The final scene had Parking Lot #4 filled with musicians drumming, children dancing, and Food Not Bombs feeding.

Two Arrested Near Farmer's Market, But the Beats Continued On