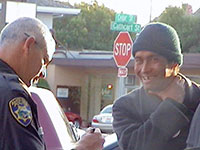 On January 16th at about 4:20pm, Santa Cruz Police Sgt. Flippo, Officer Auldridge, and three other cops (two as back-up) began writing warnings to folks on the edges of the drum circle in the parking lot at Cathcart and Cedar (Lot No. 4). The drummers, after ignoring the police for awhile, moved to Pacific Avenue to continue drumming at Soquel and Pacific.

A week ago Aldridge had parked in the same spot repeatedly watching the larger crowd—swollen by prior publicity and the presence of the Trash Orchestra. He issued no citations or warnings at that time. Sources report that in the two weeks previous to that, police had advanced on smaller drum circles and driven them away.

The Trash Orchestra calls for drummers to participate in a rousing drum circle on Wednesday, January 23rd starting around 3:30pm at the Cathcart parking lot. This time, the Trash suggest everyone come out. "Leave your ID at home and if they ask for your ID simply refuse. At that point, they can cite you as a John or Jane Doe, or will be obligated to arrest 50 drummers for violating the parking lot panic law. It'll take every cop car in town. And in the meantime, we'll drag every shopper in the market over to witness the fun."