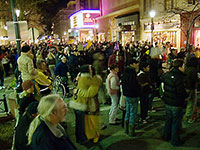 Rico writes, "This year, the third year of the Last Night DIY celebration, did you notice the trend of the city starting to claim the party as it's own? It's awesome to feel accepted of course, but it's a double-edged sword. After the first couple years of getting nothing but grief from the cautious city administrators, conservative local media, and uniformed fascists, this year the Senile and the Good Times claimed that the celebration was "quickly becoming a Santa Cruz tradition," and "was a uniquely Santa Cruz event." Hahaha. That cracks me up.

This year, Ed Porter himself "acknowledged the positive contribution Last Night DIY has made on the community." Two years ago, he characterized us in City Council and in the press as common lawbreakers. Oh well. So goes politicians. You watch, within a few years, you'll hear Ryan Coonerty and Mike Rotkin telling the media how they support the celebration and always have. If you don't budge, the system eventually redraws it's circle of acceptability around you. So if you live under empire and you have dreams of living free, you have to keep stepping outside of that circle." Read More |