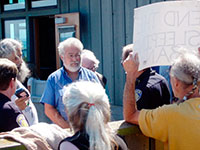 On August 26th, a number of Santa Cruz homeless activists made an appeal to the ACLU of Santa Cruz County during a fundraising event held at the small public aquarium next to the UC Long Marine center. The homeless activists would like for the ACLU to contribute to the legal fight to end the ban on outdoor sleeping and camping, using the same process behind the Jones decision precedent in the Los Angeles courts, which held that a local city cannot ban sleeping on public property if adequate shelters for indigent people are not available. Santa Cruz currently has fewer than 100 shelter beds for a countywide homeless population which could number in the thousands.

Robert Norse comments, "In Santa Cruz, Rotkin, Councilmember and four-time Mayor, is a militant supporter of the Sleeping Ban. He's also on the Board of Directors of the ACLU. He was also the main person physically blocking me, demanding I leave, threatening me with arrest, denouncing me, and trying to force us to leave signs about the Sleeping Ban outside."