Add an Event
Newswire
Calendar
Features
Home
Donate
From the Open-Publishing Calendar
From the Open-Publishing Newswire
Indybay Feature
Related Categories: Santa Cruz Indymedia | Health, Housing & Public Services
Activists ask ACLU to help end sleeping ban
by cp
Sunday Aug 26th, 2007 4:47 PM
On August 26, 2007, a number of Santa Cruz homeless activists made an appeal to the ACLU during a fundraising event held at the small public aquarium next to the UC Long Marine center. They would like for them to contribute to the legal fight to end the ban on outdoor sleeping and camping, using the same process behind the Jones decision precedent in the Los Angeles courts, which held that a local city cannot ban sleeping on public property if adequate shelters for indigent people are not available. Santa Cruz currently has fewer than 100 shelter beds for a countywide homeless population which could number in the thousands. 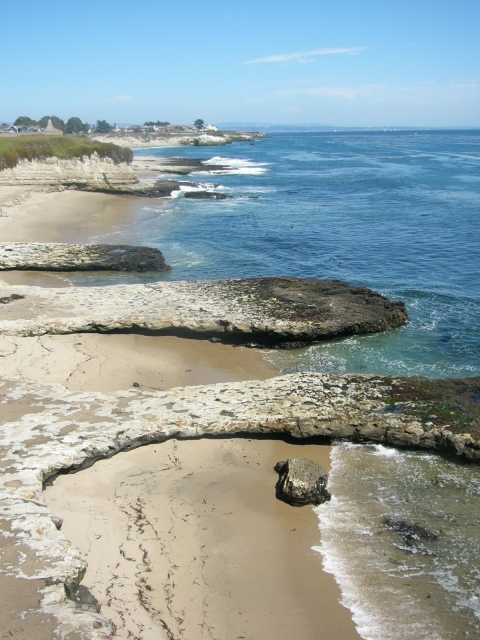 original image (1200x1600)
When considering the sleeping ban, it is appropriate to distinguish between the issue of civil rights (which the ACLU has a mission to defend) and wise government practices.
Many civil rights precedents have defended the speech of democratically unpopular groups. It is a different situation to consider the level of constitutional protection for behaviors required to remain alive. Using some amateur legal theorizing, it would seem like various statements in U.S. foundational documents do express that the government may not interfere with "life, liberty, and pursuit of happiness" etc.
That said, it is not the case that the government is required to supply everything required to sustain life. On the other hand, it is typically a smart thing for local governments to attempt to alleviate problems where the free market has failed, both for ethical reasons, and to avoid instability in society.

For example, in order to live, everyone needs food, clean water, to sleep, a place to pee, shelter from some weather conditions, as well as a few other things such as occasional medical care and freedom from toxic pollution.
Typically, most of these things are created at the family level or purchased on the market. It has never been the government's job to provide people with food. But many governments/monarchies have been toppled during starvation conditions. After the depression era of near-starvation conditions, the U.S. did a wise thing by instituting reforms to mitigate poverty so that those conditions are less likely to arise again. When the water delivery system was privatized under libertarian reforms in Bolivia, riots over the sharp price increases caused the government to reverse the decision to award ownership to Bechtel. In the United States, it is rarely argued that the government constitutionally must supply these things. It is just smart for them to regulate the market system so that things don't get out of control.
On the other hand, what if the government itself were to obstruct access to these needs, such as blocking food distribution, polluting the water, being the gatekeeper to hospitals and excluding some people?
The sleeping ban in Santa Cruz very arguably would fall in this category.

During the past year, there has been a sharp increase in camping tickets. This has resulted in homeless people leaving large county parks and being more visible in the downtown area. Some residents have called for even more ticketing for sleeping in downtown. This is a separate issue from police response to actual crimes such as theft, assault and so forth. Yet, the police department is typically not able to point to viable locations where ticketed people may go to legally sleep. This amounts to the government banning an activity essential for living. This sounds like it should be a constitutional issue.

Angry letters to the local paper express that homeless people are especially high here because they come from other regions, and that all of them should be driven out of town. This is where good government practices should come into play, separate from the constitutional issue of people needing to sleep, eat etc. It isn't necessarily clear that Santa Cruz has such an excess of homeless, given that very poor towns such as Fresno also have large conflicts over the presence of homeless. While Santa Cruz homeowners argue that everyone doesn't have a right to live in a wealthy zip code such as Beverly Hills, thus SC is not required to help everyone, Fresno might argue that because they are a city suffering from greater poverty, they would have fewer resources, and shouldn't have more poor people sent there because rents are lower.
Yet, many have noticed that some cities such as Carmel, Scott's Valley, and parts of San Jose do have fewer visible homeless. Is it really the case that individual cities are bearing social services costs for homeless people, so there is an incentive for each city to get rough in driving away homeless? Well, if this is true, wouldn't it be a good idea for city councils in San Francisco, Berkeley, Fresno, and Santa Cruz which bear greater burdens to petition to make these services administered at the state level on the basis of per capita city homeless counts? This goes for disability services as well. Some cities have far larger proportions of senior citizens, and people with wheelchairs, and relying upon local tax levies is a poor way of dealing with their special needs.
Several ACLU members serve on the city council, and they could be far more useful in seeking justice in this way, rather than arguing that they personally help out at church feedings for the homeless.
Given the rapid inflation in property values recently, the tax base of Santa Cruz has to be near its highest level right now. What is going to happen when a recession comes around, if we already are claiming that we can't afford an arrangement such as a free public camping area, and the extra policing necessary to keep it safe and secure. 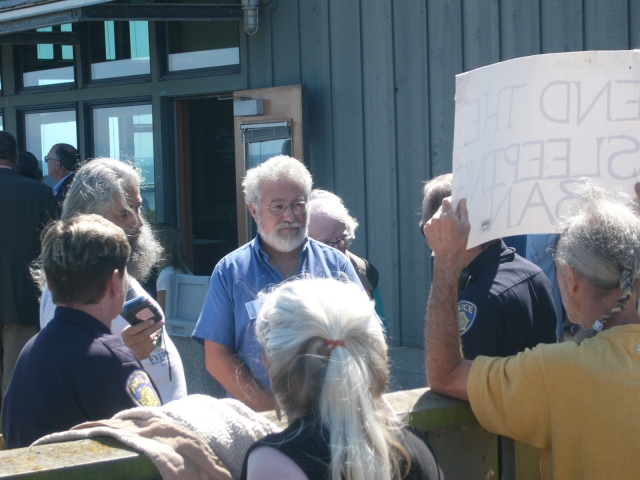 original image (1600x1200)
Robert Norse puts lots of hours into defending the Santa Cruz homeless population with his radio show and political advocacy. Here, ~15 activists had already arrived outside of the ACLU event, and he is negotiating with police so that they can go inside if they keep their signs low and don't disturb the event.
§Marimba band
by cp
Sunday Aug 26th, 2007 4:47 PM 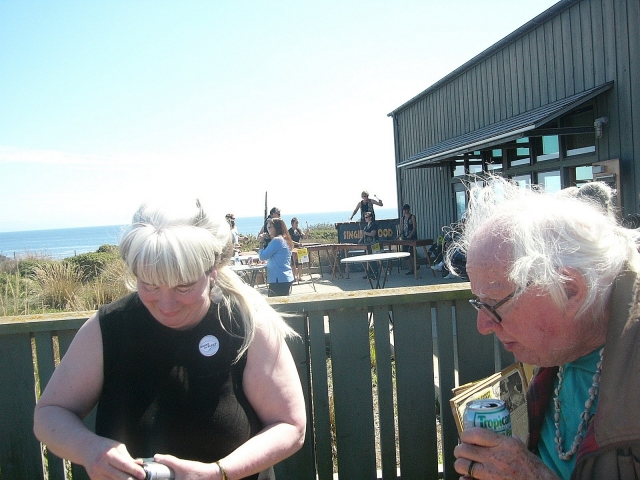 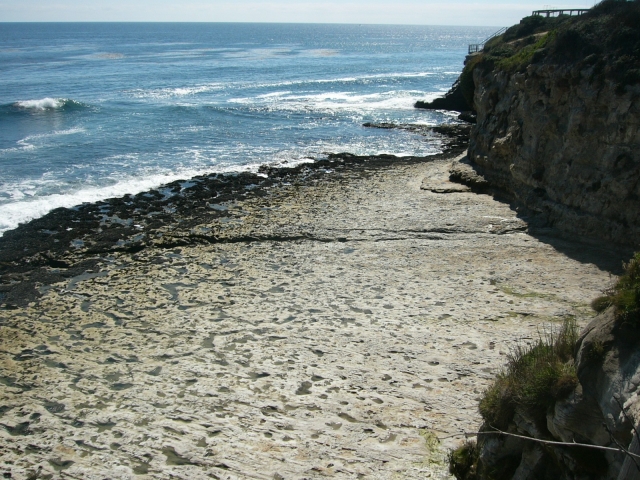 original image (1600x1200)
The Seymour center aquarium is on the property shared UCSC Long Marine Lab, California Department of Fish and Game's Raptor center which has capacity for seabirds in case of oil spills and raises some rare peregrine falcons, and NOAA Fisheries, which helps out the salmon. USGS is nearby. Both these federal agencies choose sites near universities so that there can be communication and exchange with academics, and students can perform some jobs.
§Police coming to event
by cp
Sunday Aug 26th, 2007 4:47 PM 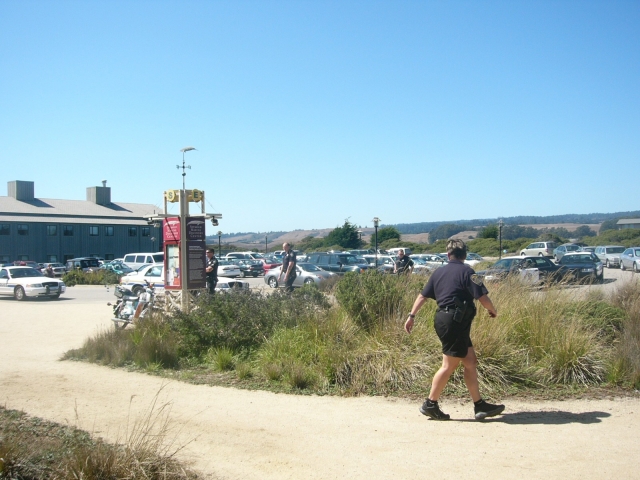 original image (1600x1200)
There were 5 police cars there, and at least one more was driving up. As I walked off, they were discussing where each one would stand while they waited for the activists who had gone inside to do something arrestable.
§Vole
by cp
Sunday Aug 26th, 2007 4:47 PM 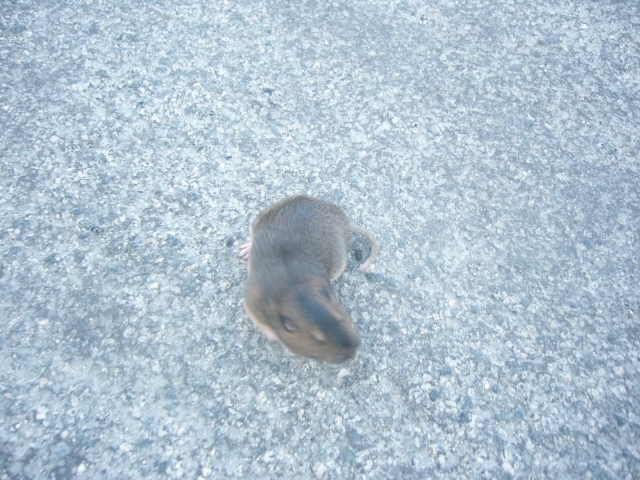 original image (1600x1200)
The large fields on this property at the edge of Santa Cruz used to be involved in brussels sprouts cultivation like the adjoining land. It is very impermeable soil, and vernal pools develop during spring which take months to drain. It is a great place to go bird watching, where one may see kites (which can hover, and sometimes fight), and CalDFG's peregrine falcons learning to hunt, herons, etc. Voles, like in this photo, have underground tunnels through the grass. They have bad vision, and so they can seem very friendly because they don't dart away.
A few building proposals for the fields have been shot down by the Coastal commission due to drainage and other issues. Next to the CODAR installation next to the blue whale skeleton, the university is building a small desalinization plant. When the marine labs were first proposed and they got the zoning permissions changed, the developer put a lot of pressure on the farmer to leave and shut off their well water.
§Parking zone
by cp
Sunday Aug 26th, 2007 4:47 PM 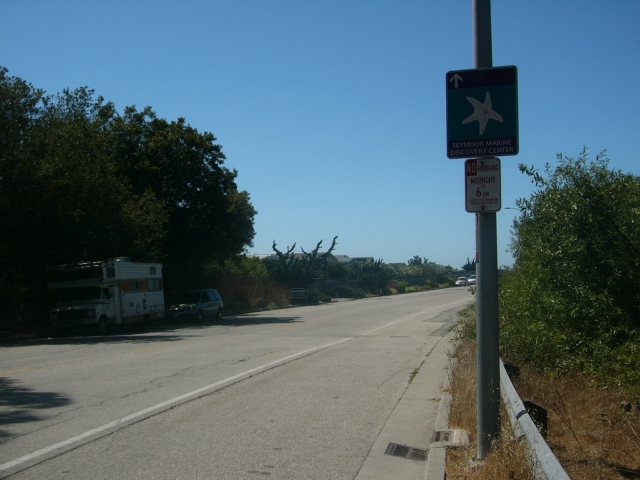 original image (1600x1200)
Compared some San Francisco Bay area cities such as Berkeley, the homeless in Santa Cruz generally have some different qualities. San Francisco has some really disabled looking people who appear to have visible drug problems and beg by intersections, or have catatonic mental health symptoms such as not leaving their park bench, or walk around barefoot and showing severe delusions - and generally make housed people wonder how they are able to make it through the week.

Santa Cruz homeless stand out for appearing very industrious and hard working. The first thing people might notice driving into town is people on bikes carrying belongings in crates over long distances between various parks. There isn't much panhandling. Also, there are more vehicle campers than would be noticed in San Francisco. During daylight, they often might park in public parks.
On the outer edges of town in the industrial zones, there are signs banning parking between midnight and 6am. This must have come about as a result of complaints, but it seems like bad public policy. Where do you think these vehicles are being driven when the parking lots are shut down after dark. Clearly, they have to try to sneak into neighborhoods and park where it's legal at night, next to apartments and single family houses. Do those residents prefer them right on their street, or out in the empty commercial areas?? It's better policy to police actual crime rather than their mere presence.
§Homeless gardens
by cp
Sunday Aug 26th, 2007 4:47 PM 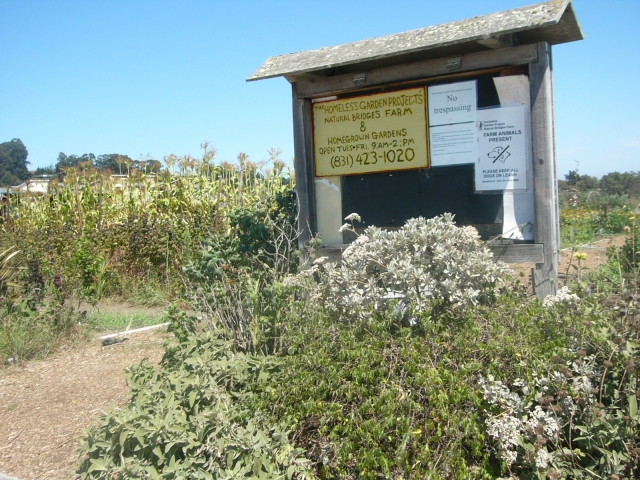 original image (1600x1200)
The homeless gardens project is also nearby, on Shaffer street. This seems like a good project for the people involved, particularly for someone with a mental symptom such as PTSD who needs some stability and therapy.
It isn't a good solution for connecting larger numbers of people with good jobs though. Agriculture and landscaping has relatively low wages, and often has excess labor supply in California. Rental prices for single people with poor credit historys or bad previous references are extremely high in all of coastal central California, and many homeless actually are holding down jobs here and have some career skills. In other cases where people have mental illness or sobriety problems, business and landscaping skills aren't the solution.
§camp clearout
by cp
Sunday Aug 26th, 2007 4:47 PM 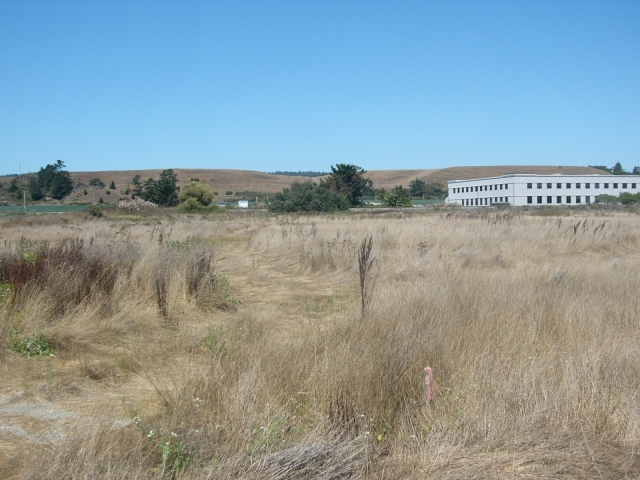 original image (1600x1200)
This is a pathway through the grass which was made by UC trucks sent to clear out some homeless encampments. I learned this when I was walking behind a worker talking on a cell phone in a parking lot a few miles away and he described throwing away people's possessions. It makes sense as a place for a desperate person to start a secret camp, because nobody was able to see that they were there from the road, and they weren't walking in from the road, but rather the distant railroad tracks.

In the background you can see the hills rising. Santa Cruz has stairlike marine terraces made through some geological process where there are a series of flat plateaus punctuated by cliffs and steep rises in elevation.
Add Your Comments
LATEST COMMENTS ABOUT THIS ARTICLE
Listed below are the latest comments about this post.
These comments are submitted anonymously by website visitors.