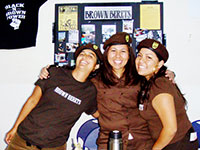 Brown Berets chose, “Immigration Behind Enemy Lines,” to build strong consciousness and action in order to counter the extremely oppressive and violent relationship between the prison industrial complex and the Migra (ICE). Youth and Power's slogan, "EDUCATE!!! ACTIVATE!!! LIBERATE!!" rang true as artists, speakers, and participants educated each other regarding the revolutionary possibilities in the face of this relationship between prisons and the Migra.