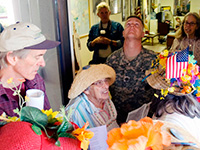 Peace advocates gathered on 41st Avenue in Capitola on June 26th to protest the ongoing wars in Iraq and Afghanistan; the recent troop surge, which has resulted in greater casualties, not fewer; and the recruitment of at-risk youth by military recruiters, many of whom use lies and manipulation in order to get people to sign up. Ten people engaged in nonviolent civil disobedience and were arrested by Capitola Police when they stayed in front of the Army recruiting office door when asked to disperse.

The protesters, including members of the Raging Grannies of the Women’s International League for Peace and Freedom (WILPF), called on the recruiters to end their efforts to enlist young people. They stated that the recruiters have a legal obligation to cease recruiting for an illegal war. The Grannies, clad in aprons and flowered hats, sang several songs at the recruiting office, including “When The Grannies Rule The World,” to the tune of “When Johnny Comes Marching Home.”

see also: Cut Off at the Pass!