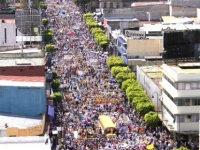 While the passage of the Central American Free Trade Area (CAFTA in English, TLC in Spanish) is a distant memory in the public political debate, implementation of the treaty continues to meet organized, spirited opposition in Costa Rica. In the US, activists are standing in solidarity with continued opposition and resistance.

In January 2002, President Bush announced that CAFTA was a priority, giving his administration “Fast Track” authority to negotiate the agreement, which is a treaty under international law between the United States, Costa Rica, El Salvador, Guatemala, Honduras, Nicaragua and the Dominican Republic. To be implemented, the treaty has to be ratified into domestic law in each of the seven countries. While relatively small in its economic scope, the agreement is basically NAFTA for this region, and part of a US strategy to implement “free trade” agreements for the entire Western Hemisphere through the eventual passage of the Free Trade Area of the Americas (FTAA).

The US was the first to pass it. Bush signed it into law on August 2, 2005 after a middle of the night 217-215 vote in the House, reportedly including late hour deal making to get the two-vote majority. By mid-2006, six of the seven countries had also passed it, with no public input and against volatile street protests met by heavy-handed government repression in El Salvador and Guatemala.

The Costa Rican government continues to announce its intention to pass the law. While the agreement was passed in a close vote in the International Affairs Committee of the Costa Rican Congress in late 2006, it still has not been debated or voted on in the full Congress. The reason for delay is that the Costa Rican people have made it clear they are ready to actively oppose its passage. Read More