Add an Event
Newswire
Calendar
Features
Home
Donate
From the Open-Publishing Calendar
From the Open-Publishing Newswire
Indybay Feature
Publish to Newswire
Add an Event
Related Categories: Americas | International | Fault Lines | Global Justice & Anti-Capitalism
Costa Rica's Last Stand: Widespread Resistance Halts Implementation of CAFTA
by Rubble (info [at] faultlines.org)
Thursday Mar 15th, 2007 5:45 AM
While the passage of the Central American Free Trade Area (CAFTA in English, TLC in Spanish) is a distant memory in the public political debate, implementation of the treaty continues to meet organized, spirited opposition in Costa Rica. In the US, activists are standing in solidarity with continued opposition and resistance.
In January 2002, President Bush announced that CAFTA was a priority, giving his administration “Fast Track” authority to negotiate the agreement, which is a treaty under international law between the United States, Costa Rica, El Salvador, Guatemala, Honduras, Nicaragua and the Dominican Republic. To be implemented, the treaty has to be ratified into domestic law in each of the seven countries. While relatively small in its economic scope, the agreement is basically NAFTA for this region, and part of a US strategy to implement “free trade” agreements for the entire Western Hemisphere through the eventual passage of the Free Trade Area of the Americas (FTAA).

The US was the first to pass it. Bush signed it into law on August 2, 2005 after a middle of the night 217-215 vote in the House, reportedly including late hour deal making to get the two-vote majority. By mid-2006, six of the seven countries had also passed it, with no public input and against volatile street protests met by heavy-handed government repression in El Salvador and Guatemala.

The Costa Rican government continues to announce its intention to pass the law. While the agreement was passed in a close vote in the International Affairs Committee of the Costa Rican Congress in late 2006, it still has not been debated or voted on in the full Congress. The reason for delay is that the Costa Rican people have made it clear they are ready to actively oppose its passage.

Costa Rica has a markedly different political history and structure than the other countries in that region. An internal struggle after WWII resulted in a government strongly guided by Social Democratic members and policy making. This has resulted in a relatively extensive public sector. A generous retirement package includes a larger set of subsidies than what exists here in the US, and labor is well organized with relatively extensive political clout. The general standard of living is higher than the other regional countries involved. Citizens enjoy free nationalized health care, free and adequately funded public education, and relatively liberal union policies. Costa Ricans – having much to lose with the passage of CAFTA – are not giving in an inch at this point.

A two-day general strike was held in the country’s capital, San José, during the last week of October. Photographs in the US media show thousands of people in the streets, led by organized labor, university students, and other activists. The message was clear: the people are ready to destabilize the economy to stop this law from passing.

Various protests were held in cities across the country through the end of the year to keep the pressure up. Coordinadora National (National Coordinating Committee), a national organization including various trade union confederations and organizations representing mostly public sector workers, had a strong hand in organizing the protests. Within the committee, the General Confederation of Workers (CGT) is more militant and includes radical trade unionists from health care, public water utility workers, and the banana workers’ union. The Costa Rican Revolutionary Workers Party (PRT) is one of numerous non-labor leftist groups actively organizing.

While there is no consensus in Costa Rica on the overall effects of passage, all agree that the rice industry will not survive competition from US-subsidized rice. Rice is the staple food, especially for the rural poor. Activists point to Mexico after the passage of NAFTA, where raw corn prices plummeted, driving millions of rural farmers from their land. Already in El Salvador, economists argue that rice production is going to disappear by the time the treaty is one year old. According to Miguel Alemán, a leader of the Confederation of Agrarian Reform Federations in El Salvador, “CAFTA, as we predicted, means death for several sectors, for example some 400,000 producers of basic cereals who are being hit hard.”

“Our cooperatives have cut back 20 percent of their employees,” equivalent to more than 2,000 workers this year, Alemán said in an interview with IPS late last year.

Universal health care cannot survive CAFTA either, due to intellectual property rights provisions prohibiting the purchase of generic medications at lower prices. Services requirements would limit the government’s ability to guarantee health access to all. El Salvador labor held volatile but ultimately unsuccessful strikes against the imposition of health-care fees in 2005 in anticipation of CAFTA.

The election of a CAFTA supporter, Óscar Arias – former president (1986-1990) and Nobel Peace Prize winner for negotiating the Salvadoran peace accords – is a blow to the resistance in Costa Rica. The Arias administration is in a very difficult position, with heavy Bush administration pressure for passage at any cost, and domestic pressure to back off and serve its citizens.

This continues an interesting dynamic in Central America, where formerly leftist governments are supporting CAFTA. In El Salvador, the FMLN, a people’s revolutionary opposition in the 1980’s, has become a governing party and provided enough votes for passage. Nicaragua’s Daniel Ortega, recently reelected after the Sandinistas’ 17-year hiatus from the presidency, presides over a sweatshop economy with one of the lowest economic standards of living in the world, and has said nothing about changing the course of CAFTA.

In December, the Costa Rican government announced its intention to pass CAFTA, planning to debate and vote in the full Congress sometime between January and March of this year. However, a short article in Prensa Latina recently announced an abrupt about-face. Approval any time in the near future “is now extremely unlikely…with the two major congressional parties adamantly opposed.” Government Minister Rodrigo Arias admitted increasing rejection in Congress due to “opposition of a majority of citizens, as witnessed in huge demonstrations in several cities in the latter part of 2006”. He said there was no clarity reached in a meeting with 25 legislators from the National Liberation Party (PLN). PLN leader Mayi Antillon said the party will stay firm in rejecting the project, and that the Legislature has more pressing national matters than dealing with this legislation for the United States.

A major rally was held in San José on February 28,with tens of thousands of union members, farmers, and other activists marching through the capital city. Smaller demonstrations were held in other provincial cities. Employees of the state-run telecommunications company were a major contingent in San José, protesting privatization of the telecomm industry. Violent police repression was reported at a protest led by banana workers in the Atlantic coast city of Limon, outside the scrutiny of the international news media. According to a press release sent to international solidarity organizations from the General Worker’s Confederation (CGT), non-violent protesters were brutally beaten and leaders were arrested and detained without provocation. The release reports and denounces the police actions while demanding that Arias order the immediate release of those detained. A long history of violent repression of banana union activities exists in that city, a major shipping port. A broad-based coalition of groups representing different economic sectors forming under the name of Coalition In Struggle Against CAFTA is planning future actions to keep the pressure up.

This impasse is certainly not the end for DR-CAFTA in Costa Rica, and cross border organizing is needed. Costa Ricans have observed continuing problems in neighboring El Salvador, where CAFTA-inspired privatization has led to strikes over unaffordable fees for health services and schooling, and the banking sector has been bought up entirely by foreign captial. U.S. dissent included public opposition from the AFL-CIO, the first time big labor has opposed a major trade agreement abroad, mostly based on the devastating effects of NAFTA. However, nothing has been heard publicly about solidarity actions to assist Costa Rican organized labor. This year may be just the right time for renewed solidarity activism at home.

This article was written with assistance from Moises Montoya of the San Francisco branch of the Freedom Socialist Party. Moises is involved with Central American solidarity organizing and was in Costa Rica during the October 2006 General Strike. 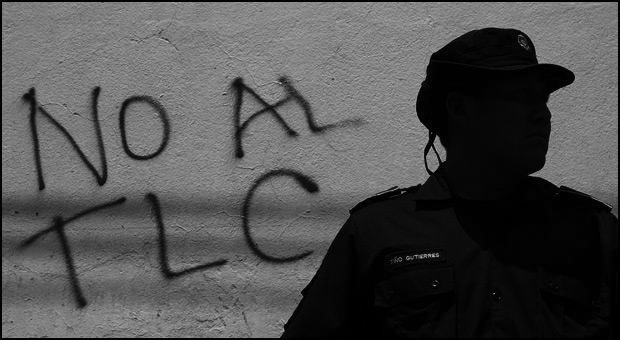 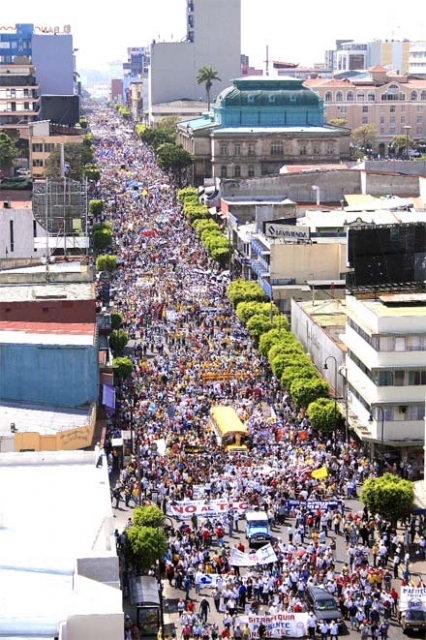 original image (440x661)
Add Your Comments
LATEST COMMENTS ABOUT THIS ARTICLE
Listed below are the latest comments about this post.
These comments are submitted anonymously by website visitors.