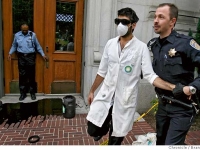 With royal fanfare, British Petroleum just donated big money in research funds for UC Berkeley, Lawrence Livermore Laboratories, and the University of Illinois to develop new sources of energy—primarily biotechnology to produce biofuel crops. This comes on the anniversary of Berkeley’s hapless research deal with seed giant Novartis ten years ago. However, at 500 million dollars, the BP grant dwarfs Novartis’ investment by a factor of ten. The graphics of the announcement were unmistakable: BP’s corporate logo is perfectly aligned with the flags of the Nation, the State, and the University.

CEO/Chairman Robert A. Malone proclaimed BP was "[J]oining some of the world's best science and engineering talent to meet the demand for low carbon energy.we will be working to improve and expand the production of clean, renewable energy through the development of better crops. This partnership reflects the rapid, unchecked, and unprecedented global corporate alignment of the world's largest agribusiness (ADM, Cargill and Bunge), biotech (Monsanto, Syngenta, Bayer, Dupont), petroleum (BP, TOTAL, Shell), and automotive industries (Volkswagen, Peugeot, Citroen, Renault, SAAB). With what for them is a relatively small investment, these industries will appropriate academic expertise built over decades of public support, translating into billions in revenues for these global partners.

Could this be a "win-win" agenda for the University, the public, the environment, and industry? Hardly. In addition to overwhelming the University's research agenda, what scientists behind this blatantly private business venture fail to mention, is that the apparent free lunch of crop-based fuel can't satisfy our energy appetite, and it will not be free, or environmentally sound.

Dedicating all present US corn and soybean production to biofuels would meet only 12 percent of our gasoline demand and 6 percent of diesel demand. Total US cropland reaches 625,000 sq.mi. To replace US oil consumption with biofuels we would need 1.4 million sq.mi. of corn for ethanol and 8.8 million square miles of soybean for biodiesel. Biofuels are expected to turn Iowa and South Dakota into corn-importers by 2008.

The biofuel energy balance -- the amount of fossil energy put in to producing crop biomass compared to that coming out -- is anything but promising. Researchers Patzek and Pimentel see serious negative energy balances with biofuels. Other researchers see only 1.2 to 1.8 returns, for ethanol at best, with the jury still lukewarm on cellulosic biofuels.