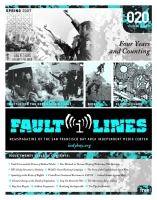 Fault Lines, the bi-monthly newsmagazine of Indybay, has just released another issue of radical political analysis and social commentary. Fault Lines #20 features exclusive articles on war resistors, squat riots, Climate Change, resistance to CAFTA, UC Berkeley's corporate sell-out and much more. Free issues of Fault Lines are available at various locations throughout the Bay Area. Contact Fault Lines if you would like to help with distributing the print edition.