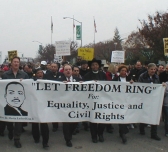 Rev. Floyd D. Harris Jr writes:
As we come around to black history month again it's business as usual with the city and county of Fresno. The same old lying politicians from our local government playing with African American history. The government has done a wonderful job of manipulating people into believing that they care about oppressed people, but in fact the government receives more profits by making sure the American people are clueless as to what their social needs are.

We all know that Dr Martin Luther king Jr. was a man who gave his life to fight for justice for black people, following God's teachings. Dr. King gave his life like just as Jesus died on the cross, and he died for all people. Now every year you march in the streets of Fresno to celebrate the history of Dr. King and all the sacrifices he made, along with other civil rights leaders. There are tons of injustice taking place in the City of Fresno - from Police Brutality, Homelessness, Dismantling of the Human Relations Commission, Unemployment, AIDS, Inadequate Public Education, Environmental Racism, Bad Air Quality, Bad Water.

If Dr. King were alive today I know he would have been on the front lines with us in Fresno denouncing The Fresno Police Department, Mayor, City Manager, Sanitation Department and the representative from District #3 for violating the constitutional rights of poor people. You will see all of these people who say they believe in Dr. Martin Luther Kings Jr.'s life in the front of the march and the microphone every year speaking about how wonderful he was, while they act totally opposite of Dr. King's legacy. If we are going to march for the celebration of Dr. King, then let's march for something that will bring justice to the community. Read More With Photos