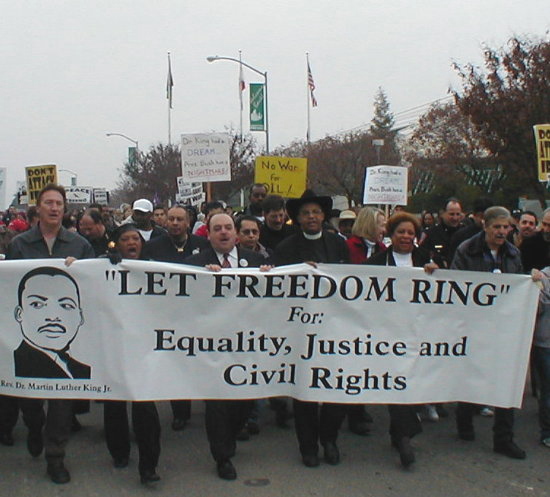 As we come around to black history month again it's business as usual with the city and county of Fresno. The same old lying politicians from our local government playing with African American history. The government has done a wonderful job of manipulating people into believing that they care about oppressed people, but in fact the government receives more profits by making sure the American people are clueless as to what their social needs are.

We all know that Dr Martin Luther king Jr. was a man who gave his life to fight for justice for black people, following God's teachings. Dr. King gave his life like just as Jesus died on the cross, and he died for all people. Now every year you march in the streets of Fresno to celebrate the history of Dr. King and all the sacrifices he made, along with other civil rights leaders. There are tons of injustice taking place in the City of Fresno - from Police Brutality, Homelessness, Dismantling of the Human Relations Commission, Unemployment, AIDS, Inadequate Public Education, Environmental Racism, Bad Air Quality, Bad Water.

The City of Fresno received an All American City award in June 2000 but the problem with the award is it does not include poor people. Just this past year, 2006, the ACLU, Lawyers’ Committee for Civil Rights, and the Heller Ehrman law firm had to come into Fresno to File a temporary restraining order and a permanent injunction in order to stop the relentless attacks on Fresno homeless residents. Clothing, medication, tents, blankets, and personal possessions such as, family photographs and personal records have been destroyed. The California State Chapter of The National Action Network under the leadership of state President Rev. Floyd D. Harris Jr. brought youths from NAN to clean up the homeless area and set a precedent, to show the city of Fresno that they didn't have to destroy those belongings.

NAN organized a sleep-out on the steps of Fresno City Hall, along with other local and statewide organizations, to bring more attention to the problems we are having here in Fresno. We first formed a prayer chain in front of city hall to pray for our leaders. We gave out socks, coats, shoes, food etc. to replace things that had been destroyed by the Fresno Police and Sanitation Department. We sang songs to uplift the spirit of everyone to let them know that there is still hope and we will not let the flame of justice go out.

If Dr. King were alive today I know he would have been on the front lines with us in Fresno denouncing The Fresno Police Department, Mayor, City Manager, Sanitation Department and the representative from District #3 for violating the constitutional rights of poor people. You will see all of these people who say they believe in Dr. Martin Luther Kings Jr.'s life in the front of the march and the microphone every year speaking about how wonderful he was, while they act totally opposite of Dr. King's legacy. If we are going to march for the celebration of Dr. King, then let's march for something that will bring justice to the community. Stop letting the government dictate how we organize or celebrate anyone's birthday. We will not march to feel good or to get some exercise, but we will march to demand FREEDOM, JUSTICE, PEACE and EQUALITY for all people.

The people in power want to get close to you so you will not hold them to public accountability. I protest against Police Brutality 365 days a year but on Dr. King's birthday I'm expected to march hand in hand with the politicians who are making life hell for my people and who don't give a damn about God's people We Sing " WE SHALL OVER COME SOME DAY." The statement that Malcolm X said is very true - he said, there is too much singing going on in America and not enough “SWING.” I'm not a HYPOCRITE. I don't eat from the oppressor's table. He or she has nothing that I want but liberation for my people. When you have people in political office who cannot stand up for you when you are being abused then those representatives need to be recalled.

Nothing has changed in America but one thing, the Ku Klux Klan ( KKK ) have taken off their white sheets and put on blue suits and a necktie. White supremacy, Jim Crow, Willie Lynch are alive and flying around in America and Fresno California. These people now sit in a position of power in the government offices, Lawyers, Judges, Police Officers, Doctors, Congressman and Pastors. They will lead the way when you are marching down the street or participating in the City of Fresno 22nd Annual Reverend Dr. Martin Luther King Jr. Celebration 2007 Living the Dream: Let Freedom Ring for Peace, Justice and Healing for all.

I want you to look back on the past year and ask yourself these questions:

We as people of color have not receive a Dream, Freedom, Peace, Justice, or Healing for over 400 years in America! 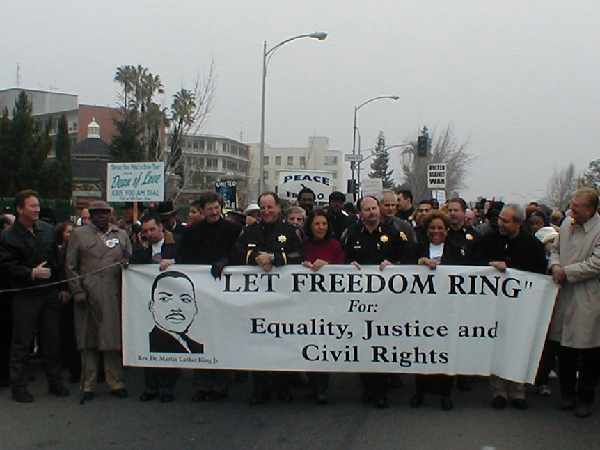 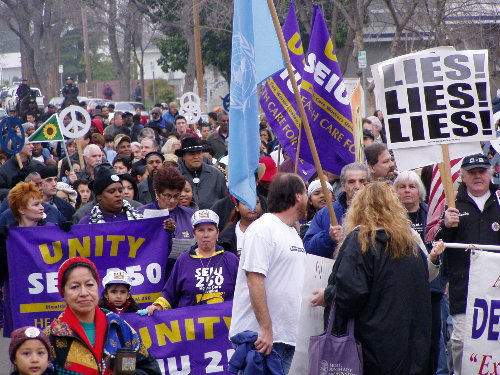 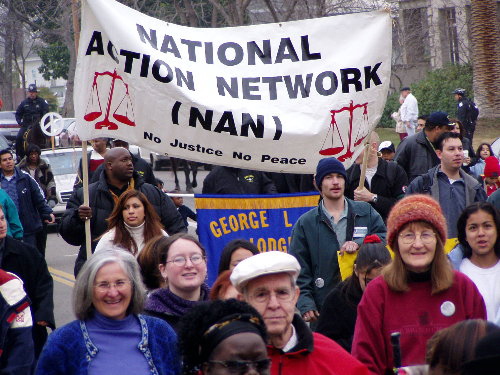 The National Action Network was in the 2004 MLK march. All photos by Mike Rhodes
Add Your Comments
LATEST COMMENTS ABOUT THIS ARTICLE
Listed below are the latest comments about this post.
These comments are submitted anonymously by website visitors.