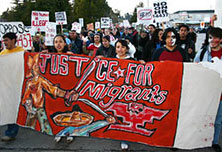 More than five hundred people joined rallies and marches against HR 4437 in Santa Cruz on March 17th. The rally started at the Santa Cruz County Building and then marched to Beach Flats Park, with the community running out of their homes and into the streets throughout the night. People then left the Beach Flats, headed up Pacific Avenue, and back to the County Building for a final rally of the night.

HR 4437 would make it a felony offense to be in the U.S. without proper documentation. This would push undocumented immigrants further underground, and increase the potential for exploitation by employers. This bill would also criminalize nurses, teachers, clergy, social workers, and anyone else who aids, assists, or otherwise has regular contact with undocumented immigrants. (protest announcement).

The Santa Cruz March follows a pro-immigrant march in Chicago estimated at hundreds of thousands of people and rumored to be the biggest march in Chicago's history, and a regional immigrant walk-out in Philadelphia, amongst many actions nation-wide.

see also: 100+ Take to the Streets in Monterey in Oposition to HR 4437 and Indybay's Immigrant Rights Page