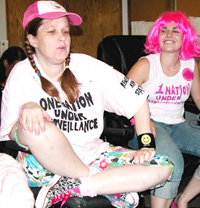 After the December 20th reports that the FBI has been monitoring and infiltrating political organizations, the three California affiliates of the ACLU are seeking information about the intelligence gathering efforts of law enforcement agencies in this state. The Public Records Act request is being sent to Attorney General Bill Lockyer and focuses on the California Anti-Terrorism Information Center ("CATIC") and information that it may have received from the FBI.

The national ACLU released FBI documents that were obtained after the group filed Freedom of Information Act (FOIA) requests to find out whether the FBI’s partnerships with local law enforcement in Joint Terrorism Task Forces has resulted in increased surveillance of political and religious activity. The documents about several organizations showed the FBI expanding the definition of “domestic terrorism” to include citizens and groups that participate in lawful protests or civil disobedience.

The ACLU announced on December 21st that it is seeking records held by CATIC and the CIB (Criminal Intelligence Bureau) on the ACLU California affiliates and chapters, Greenpeace, People for the Ethical Treatment of Animals, United for Peace and Justice, Food not Bombs, Code Pink, UC Santa Cruz Students Against the War, Fresno State Campus Peace and Civil Liberties Coalition, Peace Fresno, War Resisters League West, College Not Combat, and the American-Arab Anti-Discrimination Committee, as well as a number of police documents. Under the California Public Records Act, the agencies have 10 days to respond.