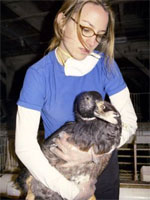 Mark Hawthorne writes in the October issue of Satya magazine:
When the animal rights movement began widely focusing on farmed animals in the 1980s, it wisely chose the veal industry as a primary target. Images of baby cows locked in tiny crates spoke volumes, and most consumers were rightly appalled when they learned of the cruelties these male calves endured. As the public’s taste turned away from veal, countless restaurants dropped it from their menus, and, although the anti-veal campaign continues, their initial success buoyed animal protectionists to further action. It is not a stretch to say that the culinary extravagance known as foie gras, the “fatty liver” of male ducks and geese, is this decade’s veal. As with veal, foie gras is created by grossly manipulating an animal’s body—in this case the Moulard duck—to provide a fleeting gustatory pleasure to the palate. And like their bovine counterparts, the birds being exploited for their livers have activists around the globe championing their cause. More than a dozen countries have outlawed foie gras production, and last year, animal advocates sponsored a California bill that will ban the production and sale of the delicacy in that state in 2012. Similar legislation is pending in New York, Massachusetts, Illinois, and Oregon. Read Full Article