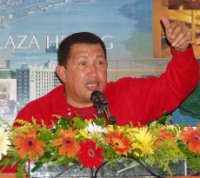 Tensions Between The US And Venezuela
US Threats Against Chavez

8/28/2005: Clashes have broken out in the streets of Caracas between supporters and opponents of President Hugo Chávez. Tensions have been building between the US and Venezuela since Chávezrescinded the rights of US DEA to operate in Venezuela on August 12th, claiming that they were involved in spying and themselves engaged in drug trafficing. On August 23rd, Christian Coalition leader Pat Robertson used his nationally syndicated show the 700 Club to call for Chavez's assasination. Chavez responded to the threat by temporarily suspending permits for foreign missionaries and offering to provide the poor in the US with cheaper gasoline. While a US aircraft carrier is stationed off the coast, any US attempt to overthrow Chavez may have been undermined by the widespread condemnation of Robertson's statement.
Democracy Now | U.S. Hands Off Venezuela Campaign | revolutionaries and a country on the edge

While constantly referred to in the US media as a dictator, Hugo Chávez was elected President of Venezuela in 1998 with the largest percentage of the vote received by any Venezuelan leader in decades. After taking office, Chávez embarked on a series of sweeping changes to the Venezuelan government, using referendums to restructure the government and pass a new Constitution.

On April 9, 2002, Venezuela's largest union federation, the Confederación de Trabajadores de Venezuela (CTV) backed by the US based AFL-CIO, called for a two-day general strike. This may have been in response to Chávez's having forced the unions to hold new elections of the leadership amid fraud allegations. The Venezuelan Federation of Chambers of Commerce joined the strike and called on all of its affiliated businesses to close for 48 hours. On Thursday, April 11, an estimated half million people marched to the headquarters of Venezuela's oil company, PDVSA, in defense of its fired management. After violence erupted at the demonstration and 17 people were killed, Commander-in-chief Lucas Rincón Romero announced in a national broadcast that Chávez had resigned. The President of the Chambers of Commerce, Pedro Carmona Estanga, appointed himself President, dissolved the National Assembly, declared void the 1999 Constitution, and fired the entire Supreme Court. Carmona's installation as President generated a widespread uprising in support of Chávez that was suppressed by the Metropolitan Police. The Presidential Guard – which according to some sources had been strengthened by Chávez in advance after being warned of the rebellion – retook the palace and the rebellion collapsed. During the brief coup, the US was one of the only countries to recognize the new leadership and Chavez has accused the US (and specifically Elliott Abrams and Otto Reich) of being the real force behind his overthrow.

Just months after returning to power, the Chávez government was faced with a strike aimed at forcing the president from office by cutting off the state from all-important oil revenue. In August 2003, opposition leaders began a process to recall Chávez, a procedure first introduced in Venezuela in Chavez's own 1999 constitution. The recall vote was held on August 15, 2004 with a record numbers of voters turning out. 59.25% of the vote was against the recall. Election observers Jimmy Carter of the Carter Center and Organization of American States Secretary General César Gaviria endorsed the results of Venezuela's recall referendum.

Since the referendum Chavez has clashed with the US over his close relations with Cuba and Iran. In July, Chavez and other left-leaning South American leaders launched the Telesur TV network intended to help counteract US propaganda.

Past Indybay Coverage Of Venezuela And Hugo Chavez:
Hands Off Venezuela Meeting in San Francisco | Chavez Speaks at the World Social Forum | Prosecutor in Chávez Coup Inquiry Is Assassinated | Chavez Wins Venezuelan Referendum | AP Leaves Democracy in the Balance as Chavez Averts Coup | Narco News on the Venezuelan Coup, the Media and How to Stop Both of Them | Popular uprising reverses Venezuelan coup