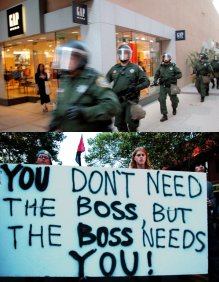 Updates from Palo Alto:
10:20pm: Things are quieting down in Palo Alto according to reports. No arrests have been reported at this time.
9:05pm: Police pepper sprayed a woman on the sidewalk. There are 10 womyn sitting in the street (University Ave). Police are getting closer to protesters and "about to surround them," according to reports. Police declared "unlawful" assembly in a public plaza.
8:48pm: Police declared protest to be "unlawful". Caller reports police to possibly be pointing out an arrest.
8:43pm: Police on horseback, blocking protest in front of shopping district in downtown. Protesters dancing in street with a nice sound system.
8:00pm: Reports of heavy police presence, including many riot cops.

On Saturday June 25, there was an Anarchist-organized anti-war march in Palo Alto. At 7pm, several hundred people gathered at Lytton Plaza in downtown Palo Alto (University Ave. at Emerson 2 Blocks from Palo Alto Caltrain) for the start of the march.
Organizers of the event issued a statement before the march saying, "We will march against imperialist war, invasion, and occupation; against Bush and his corporate interests; against empire and against the systemic war machine. This is the new face of the anti-war movement. After a strong peak at the beginning of the invasion of Iraq and a two year ebb, the movement is again building momentum. But the movement is also growing louder, angrier, and more radical. As the occupation drags on with more and more casualties each day, popular outrage is growing, and with it popular support for the movement through which it is expressed."
Read More | Photos: 1 | Video
Event Announcements: 1 | 2 | Anarchists talk about demonstration | More Anti-war Protest Coverage