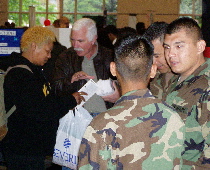 Counter Recruiting in the Central Valley
Activists Threatened with Arrest

4/14/2005: Counter recruiting activists handed out fliers, talked to students, and were threatened with arrest at a job fair at Fresno City College. Army recruiters objected to the activists and claimed they were interfering with their job. After complaints were made to the event organizers the counter recruiters were asked to leave. Instead of leaving they were joined by more supporters and continued to hand out fliers and talk to students. Fliers and brochures were distributed throughout the day by FCC students and community supporters

The counter recruiters were told that the community college had rules prohibiting free speech and that if they wanted to hand out fliers they would have to fill out a form and wait at least ten working days. Campus police were more concerned with a littering problem than the First Amendment. Read the story here

Last month the Reedley Peace Center held a vigil for peace and heard a presentation by high school students about their efforts to counter the lies of military recruiters on campus. Additional counter recruiting efforts are being planned in the Central Valley. To find out about upcoming counter recruiting events go to the Peace Fresno web site.