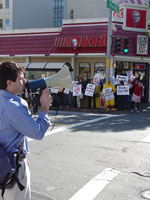 Over 100 activists descended upon the KFC at Eddy and Polk in San Francisco Sunday February 5th for what normally would have been the noontime lunch rush. It was enough to cover all four corners of the intersection. Many long-time animal activists remarked that this was the largest animal rights demonstration that they had ever attended. High turnout was largely due to the fact that this weekend PETA held the first of eight 2005 "Helping Animals 101" two-day conferences just a few blocks away. It was the first demo ever for approximately half of those out there, and organizers hope that these newly-minted activists will help strengthen the ongoing PETA-initiated KFC demos around the Bay Area which are sponsored locally by grassroots groups such as Bay Area Vegetarians, Animal Rights Alliance, and East Bay Animal Advocates. More Photos | Video