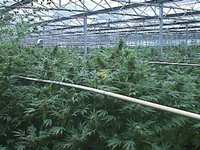 11/1/2004: Voters in Oakland and Berkeley this fall have opportunities to affect medical marijuana users in their communities by affecting licensing or permitting of cannabis dispensaries.

Oakland's Measure Z would make private adult cannabis offenses the lowest priority for Oakland police. It would direct the city to support changes in public policy to allow licensing, sale, and regulation of marijuana for private adult use. The purpose of this ordinance, proponents say, is to reduce law enforcement costs, eliminate criminal traffickers, keep cannabis off the streets and away from children, raise much-needed revenue for the city, and advocate for sensible changes to cannabis law at the state level, and other levels of government as necessary. Measure Z was endorsed by Barbara Lee.

Berkeley's Measure R would have required the city to issue permits for medical marijuana dispensaries, and remove fixed limits on the amount of medical marijuana patients and caregivers can possess. By eliminating a requirement that medical marijuana dispensaries in the city get a use permit, Measure R would allow them to open anywhere permitted by zoning laws. Under current law, dispensaries for medical marijuana are required to go through a long process to obtain permits, including a public hearing. This has proved difficult for a dispensary that wanted to move their location. The city recently voted to restrict the number of clubs in Berkeley to the three that are currently in operation. Daily Cal article about Measure R | Berkeley Voice article about limited number of pot clubs in Berkeley
Salon's Drug War Rant National 2004 Voting Guide