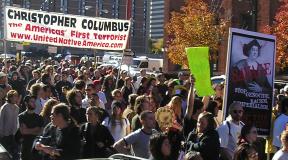 Monday Oct. 11th was Indigenous Peoples Day, still known as "Columbus Day" in society's more reactionary quarters, when hundreds voyage to Alcatraz Island for the annual sunrise service. On Oct. 9th, over 200 people, including scores of American Indian Movement members, were arrested during a blockade of Denver's "Columbus Day Parade," as organizers continue to call it despite years of protests. Venezuela observes Indian Resistance Day on Oct. 12th. On Sept. 18th, tribal members from the Lakota, Dakota, Ponca, Kiowa and Dine' Nations came to the Missouri River at Chamberlain, South Dakota to stop a "reenactment" of the Lewis and Clark expedition, saying "the act of genocide stops here"; reenactors were presented with a symbolic blanket of small pox. In northern California, Maxxam/Pacific Lumber is occupying land stolen from the Wailakki people.