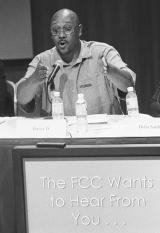 FCC and Media Monopolists Face Hot Criticism at Monterey Hearing
What the FCC Is Going On?

The Federal Communication Commission's only west coast hearing on media and "localism" was held in Monterey, CA on July 21st. Although Chairman Michael Powell, son of Secretary of State Colin Powell, was conspicuously "AWOL," three of the five Commissioners were on hand. Six hundred community members and media activists bumped shoulders with Clear Channel reporters and executives for a chance to speak their piece on the issue of local vs. corporate media.

The FCC was recently ordered by a federal appeals court to review its media consolidation plan, which the FCC had voted to push through despite literally millions of letters of protest from the public pouring in to FCC headquarters in Washington. The FCC's plan would allow a single corporation to buy out smaller firms and own all mass media in a "market," including radio, television, cable, newspapers, newsracks and billboards.

Davey D, from KPFA Berkeley, put in eleven years across the bay at KMEL. In October 2001, while a DJ on KMEL, Davey D conducted an interview with Congresswoman Barbara Lee, the only member of US Congress to vote against going to war in Afghanistan. He was promptly fired from the station, which had recently been acquired by Clear Channel. Davey spoke about the importance of public airwaves, the manipulative ways of corporate media conglomerates, and gave examples of how voices are being omitted "with the media's most powerful tool: Silence."

The open microphone session began at around 8:30 and went almost until midnight. Of the hundreds who came out and lined up to speak, the majority were advocates of tighter regulation on corporate media ownership, and more locally-owned independent media sources to create a healthy democratic debate. Organizations like Alliance for Community Media, Grade the News, Media Alliance and Media Watch were present, as well as pirate radio DJs from Enemy Combatant Radio and Free Radio Santa Cruz.