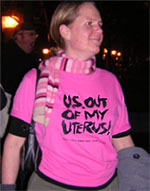 Various organizations called for a demonstration in San Francisco on the 31st anniversary of the Roe v. Wade decision. Over 200 women and their supporters gathered at Powell and Market, and then marched to City Hall and UN Plaza for a rally. Code Pink, the Radical Cheerleaders, NOW, NARAL, and Planned Parenthood were out in force with signs, speakers, and performances.
Photos: 1 | 2 | 3 | 4  Video: 1  Audio