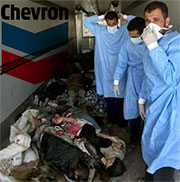 Latest update: More than 30 detained, crowd still vibrant and strong
4/14: In a show of continued resistance to an increasingly belligerent Bush Administration, individuals and affinity groups associated with the Direct Action to Stop the War network vowed to shut down one of the leading beneficiaries of the invasion of Iraq and the alleged "War on Terrorism," Chevron-Texaco. The massive corporation has been implicated in the destruction of communities both locally and abroad.
Photo: 1| 2| 3| 4| 5| 6| 7| Video: 1 | 2