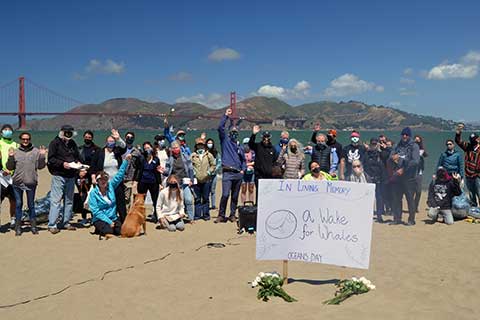 Conservation groups and whale lovers gathered on June 8, which is World Oceans Day, at Crissy Field Beach in San Francisco to honor the 12 dead whales that have washed up in the Bay Area so far this year and call for greater protections. Attendees took actions calling for specific solutions to the three top threats to whales: ship strikes, entanglement in fishing gear and climate change.

Against the backdrop of the Golden Gate, through which container ships and fishing boats pass regularly, speakers at the event called for a mandatory 10-knot speed limits for ships passing through whale habitat along California’s coast and the conversion of California’s trap fisheries to new ropeless gear to prevent deadly entanglements. They also called for strong national action to address climate change, which can cause malnutrition as whales’ food sources are decreased or moved, sometimes bringing whales into areas where they’re more likely to be entangled or hit by ships.

“Dead whales washing up on Bay Area beaches is a wake-up call. We answered that call at this event by demanding action to address ship strikes, entanglement in fishing gear and climate change,” said Steve Jones with the Center for Biological Diversity. “Whales are essential to healthy oceans because they spread nutrients and store carbon. The more we can do to protect them as their populations recover, the better off we’ll all be.”

A Wake for Whales: Protest for Endangered Marine Life on Int'l. Oceans Day