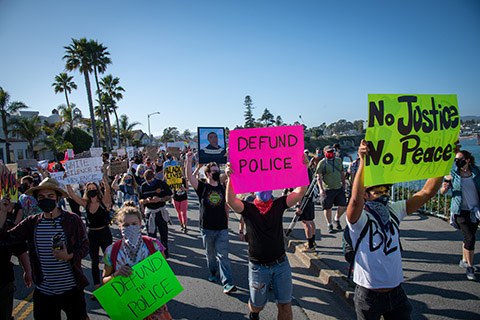 The police murders of George Floyd, Breonna Taylor, Rayshard Brooks and too many more, have mobilized unprecedented numbers of people to take to the streets and declare that Black Lives Matter. Black people are 300% more likely to be killed at the hands of police than white people. Black people have been “28% of those killed by police since 2013 despite being only 13% of the population,” as reported by the organization Mapping Police Violence. A central feature of the current uprisings is the demand to defund police departments, a demand which is also taking root in Santa Cruz. The Movement for Black Lives is leading the call to defund as the only viable step towards ending police violence and murder of Black people.

In contrast, the Santa Cruz City Council recently approved a new budget which includes an increase in police funding. The budget includes $31,098,835 for police, an increase of almost 1.5% from last year, and 27.8% of the city’s general fund budget. Ironically, in a prior meeting, the council declared July as Black Lives Matter month. They voted to display the Black Lives Matter and Pan-African flags outside of council chambers every July. The newly approved police budget begs the question of how serious the city council is about making Black lives matter. Are their recent July gestures just superficial? That said, the council also voted to ban predictive policing and facial recognition software, which are positive developments.

Related Features: Get Police Off Campus | Uprisings Explode Across the Country After Murder of George Floyd