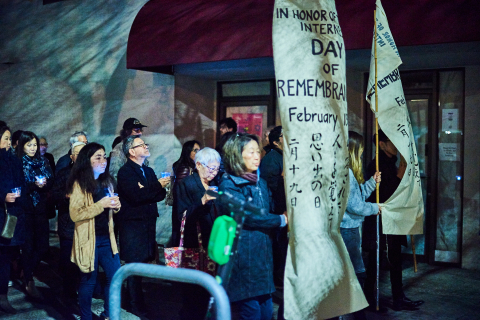 On February 17, members of the greater San José Japanese American community commemorated the anniversary of Executive Order 9066, which led to the incarceration of 120,000 Americans of Japanese descent during World War II. At the same time they protested the National Emergency Trump announced two days earlier in order to build his wall on the Mexico-U.S. border.

Masao Suzuki, professor at Skyline College, spoke of the similarities of immigrants from Japan starting in the late 1800’s and Central American refugees today. He said the World War II concentration camps were created in a climate of racial prejudice and a failure of political leadership, the same situation we find ourselves in now. He added that, “The yellow peril of a hundred or more years ago has been replaced by a ‘brown peril’ today.”

Other featured speakers included Chizu Omori who was incarcerated in the Poston camp on the Colorado River Indian Reservation in Arizona during WWII and Attorney Don Tamaki who gave insight on Fred Korematsu’s legal challenge to his incarceration during that war. A candle-lighting ceremony, with one candle for each of the ten incarceration camps, preceded a march in the neighborhood adjacent the Buddhist temple, with its backdrop of historic buildings.