Add an Event
Newswire
Calendar
Features
Home
Donate
From the Open-Publishing Calendar
From the Open-Publishing Newswire
Indybay Feature
Publish to Newswire
Add an Event
Related Categories: South Bay | Racial Justice
Day of Remembrance: Japanese Americans Recall WWII Incarceration
by Text: R.R. Photos: Chris Cassell
Friday Feb 22nd, 2019 5:07 AM
Immigration issues of today parallel the Japanese American experience during WWII, when families were removed from their homes on the U.S. West Coast to distant locations and incarcerated. Racism was, and is, at the core of both. The 39th annual Day of Remembrance on February 17th featured reminiscence, music, and a march through historic San José Japantown that was also a protest of Trump's National Emergency, announced two days earlier. 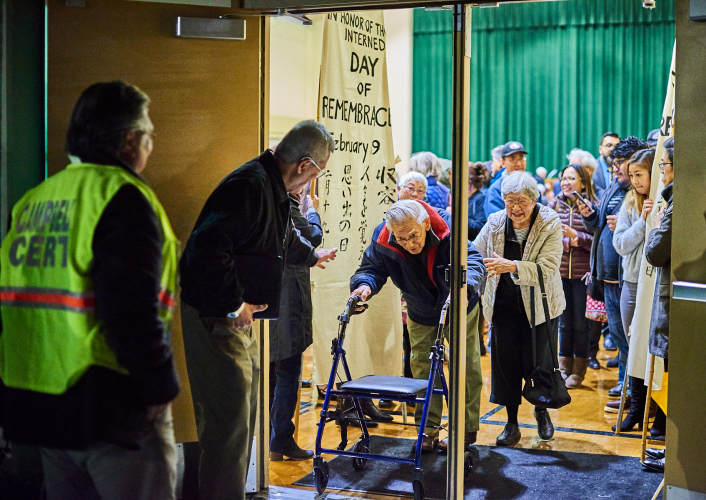 original image (1695x1200)
As a child, Chizu Omori was incarcerated in the Poston camp on the Colorado River Indian Reservation in Arizona during WWII. She shared her remembrance from a podium in the San José Buddhist Church Betsuin on the 77th anniversary of the signing of Executive Order 9066, commemorated by Japanese Americans with events on both U.S. coasts and even in the midwest.

Attorney Don Tamaki gave insight on Fred Korematsu’s legal challenge to his incarceration during that war. Tamaki served on the legal team that reopened the landmark U.S. Supreme Court case. Korematsu was exonerated in 1983, based on a ruling that the U.S. government had lied in accusing Japanese Americans of threatening American security. Tamaki called Trump’s National Emergency unconstitutional.

A candle-lighting ceremony, with one candle for each of the ten incarceration camps, preceded a march in the neighborhood adjacent the Buddhist temple, with its backdrop of historic buildings. San José Japantown is one of the last three Japantowns in the United States, the others being in San Francisco and Los Angeles. The Japantown in San José is the most authentic in that it wasn’t largely torn down and rebuilt. Many of the earliest buildings still remain; here photographer Chris Cassell captures marchers passing by some of those historic places.
§Chizu Omori recalled her days of incarceration
by Text: R.R. Photos: Chris Cassell Friday Feb 22nd, 2019 5:07 AM 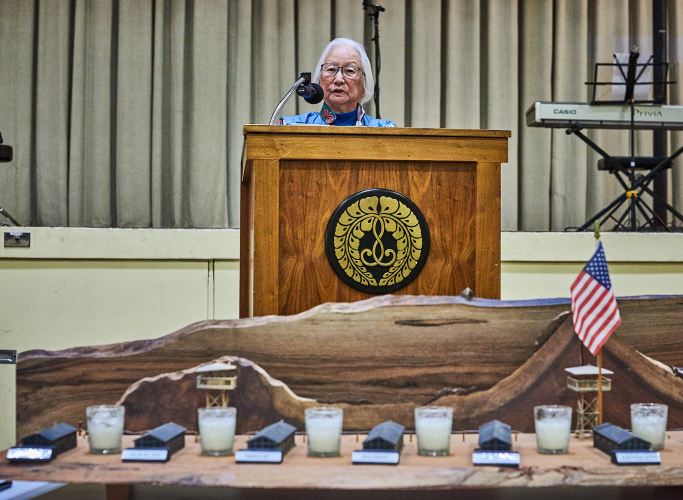 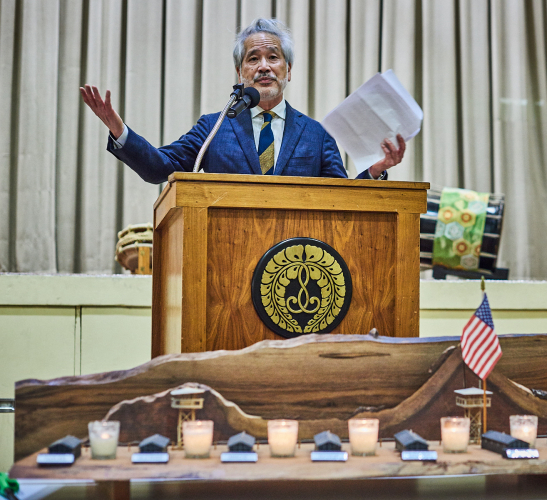 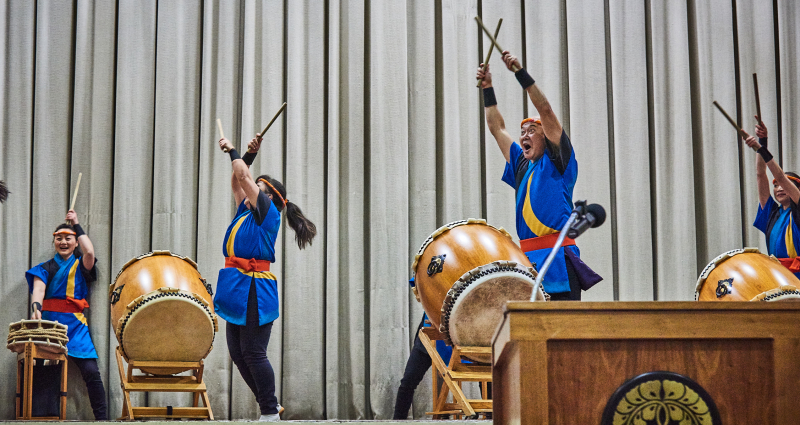 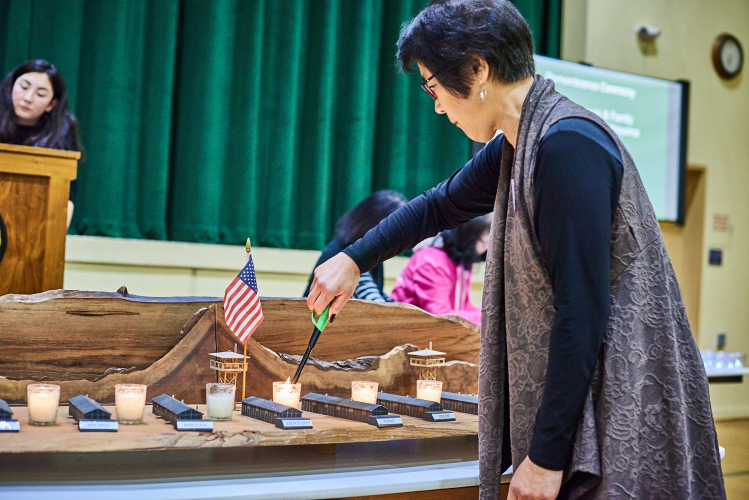 original image (1798x1200)
On the far right are small buildings representing Topaz, in Utah, and Jerome, located in southeastern Arkansas. Jerome was the last camp to open and the first to close.
§Tule Lake and Gila River
by Text: R.R. Photos: Chris Cassell Friday Feb 22nd, 2019 5:07 AM 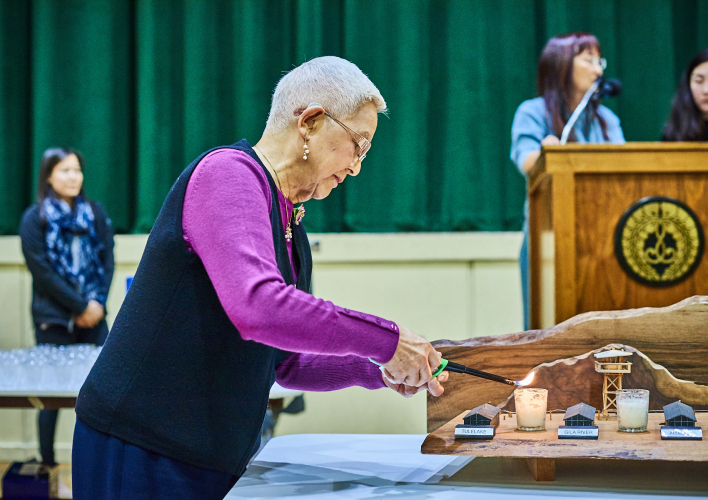 original image (1700x1200)
Tule Lake is an example of the U.S. government's abuse of power against people who dared to speak out against the injustice of their incarceration. It was where inmates deemed disloyal from both Hawai'i and California were held near the California-Oregon border. Gila River, in AZ, held over 13,000 inmates.
§Let's march!
by Text: R.R. Photos: Chris Cassell Friday Feb 22nd, 2019 5:07 AM 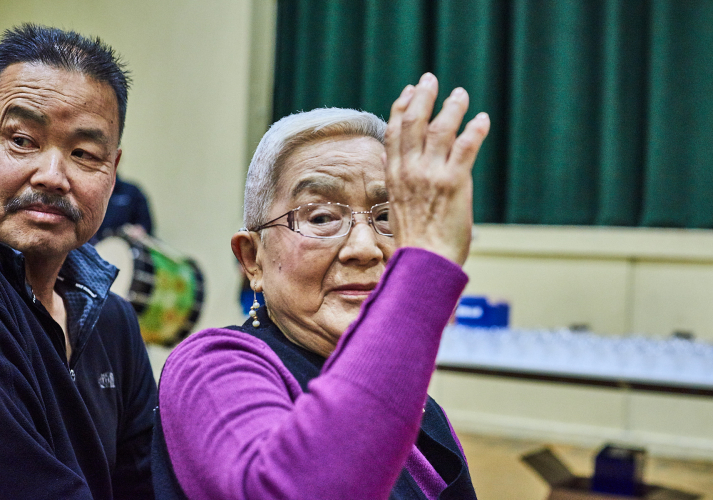 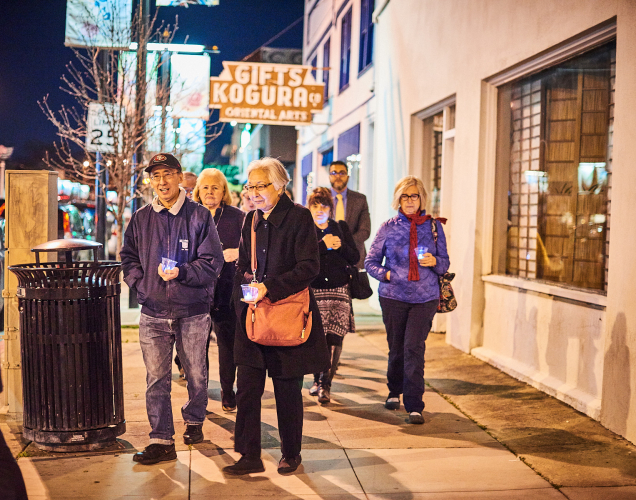 original image (1527x1200)
Among the oldest businesses in San Jose Japantown is the Kogura Company, a store started by Kohei Kogura in 1934. As of 2017 it was still being run by his family.
§Marching past Kaita Restaurant/Shanghai Building
by Text: R.R. Photos: Chris Cassell Friday Feb 22nd, 2019 5:07 AM 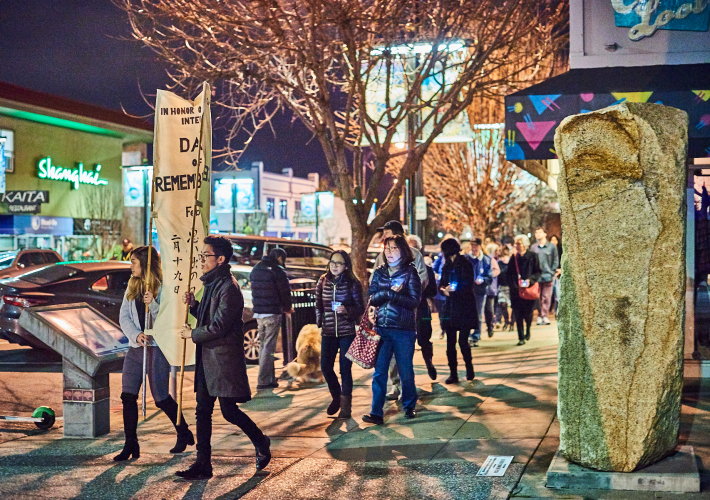 original image (1706x1200)
The Shanghai Building seen here is a reminder that our Japantown here in the South Bay was built on the site of a Chinatown, reflecting waves of immigration.
§Performers marching
by Text: R.R. Photos: Chris Cassell Friday Feb 22nd, 2019 5:07 AM 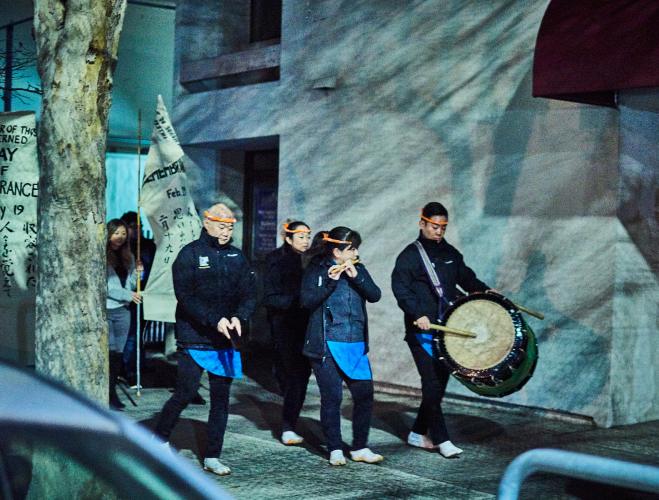 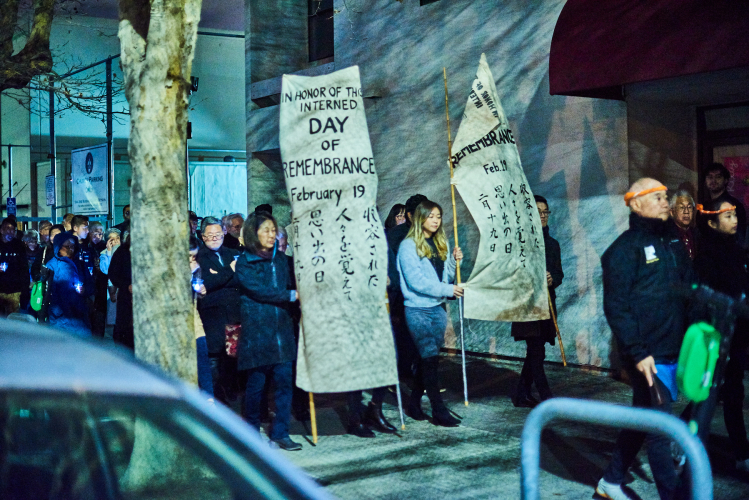 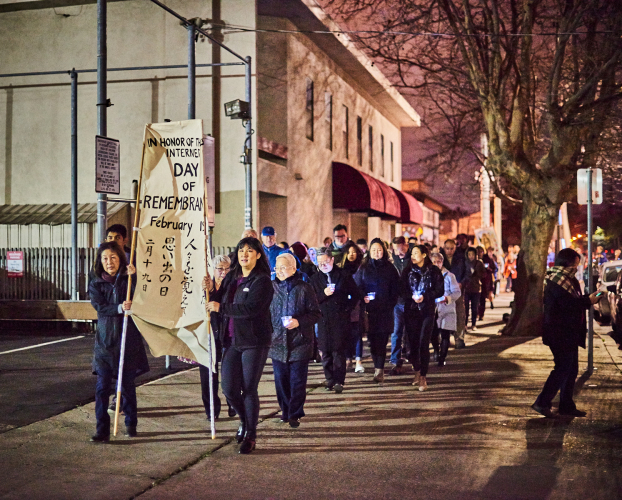 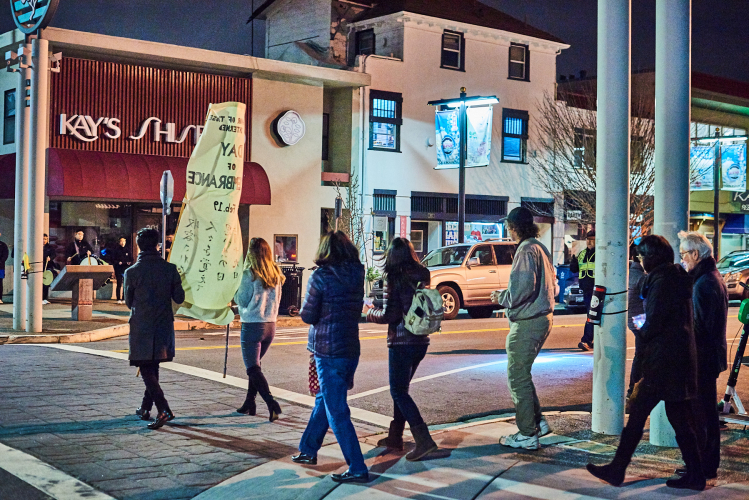 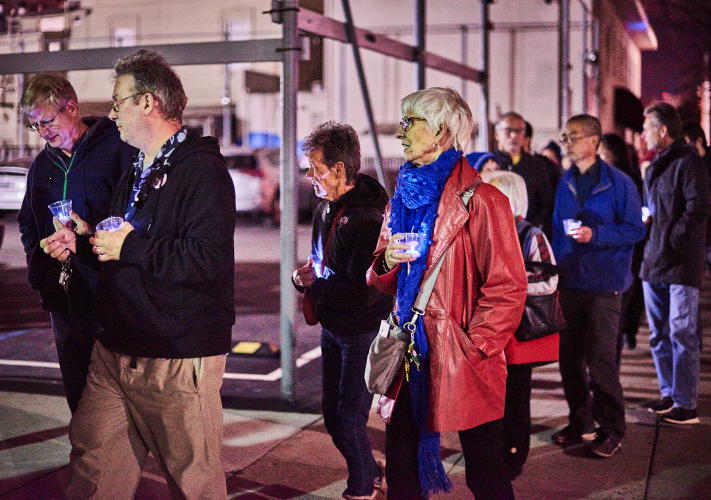 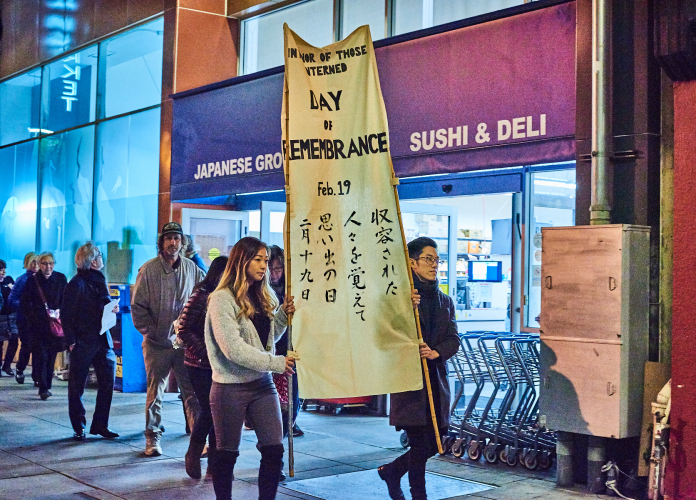 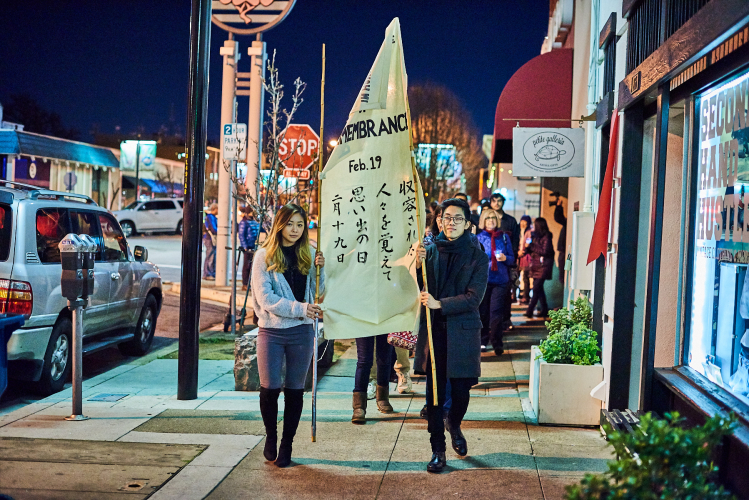 original image (1798x1200)
New stores have replaced original ones, and most of the historic buildings have had face lifts.
Add Your Comments
Support Independent Media
We are 100% volunteer and depend on your participation to sustain our efforts!