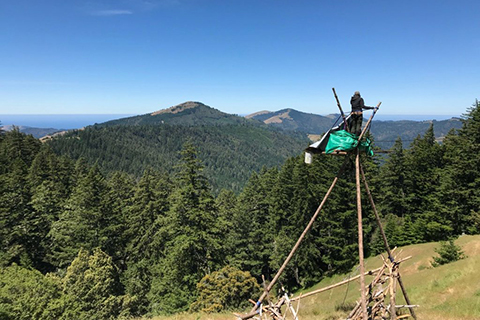 A long-standing logging road blockade defending the Rainbow Ridge in the Mattole River watershed was raided in recent days, but activists are still in the woods and on the road, struggling to hold the line. The Rainbow Ridge area is vital habitat for rare and endangered species and contains over 1100 acres of ancient Douglas fir and hardwoods. The Mattole watershed has been an area protected by community direct action since 1998, and and forest defenders declare it will continue to be until it is rightfully preserved.

The Humboldt Redwood Company (HRC) wants to gain access to Rainbow Ridge to log in un-entered Douglas fir forests. HRC, as well as Mendocino Redwood Company, is owned by San Francisco's Fisher family, owners of the GAP empire. The Fishers themselves deny day to day involvement in the timber company's policies, but as owners, they are the bottom-line decision-makers. Activists say the Fishers need to feel the heat and encourage calls be made to GAP corporate headquarters in San Francisco demanding that logging crews be pulled out of old growth forest.