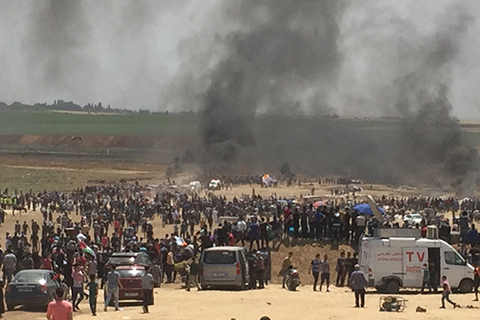 The Palestinian Authority called for a general strike on May 14 to commemorate the 70th anniversary of the Nakba (the Catastrophe), the day in 1948 when some 700,000 Palestinians were forced out of their homes and displaced by Israel. Also on May 14, senior members of the Trump administration gathered in Jerusalem for the opening of the new U.S. embassy, sparking massive nonviolent protests across Palestine. Palestinians claim Jerusalem as the future capital of their independent state, and the U.S. moving the embassy from Tel Aviv ignores Palestinians' right to self-determination.

The following day, May 15, over 1,000 Palestine supporters turned out in San Francisco to mark the 70th anniversary of the Nakba. The event, both a demonstration and a commemoration, was held outside the Israeli consulate, and was followed by a march to the Federal Building. Solidarity actions were also held in San José and Santa Cruz.

Report: Ongoing Nakba Must End — Time Has Come for the International Community to Act

Rally to Commemorate the Day of the Nakba |