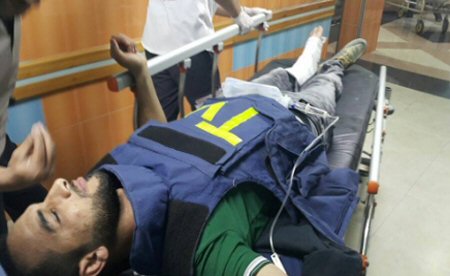 The office condemned, in a statement, deliberate Israeli attacks on Palestinian journalist crews while covering the Great March of Return.

He also said that journalist Rabee’ Abu Nqairah was suffocated with Israeli tear gas fired against Palestinians east of Rafah.

He called for the formation of an international investigation committee to look into Israeli attacks against Palestinian journalists, calling to cease the membership of the Israel in all international forums concerned with the freedom of opinion and expression and defending the rights of journalists.

In praising their great effort, Maroof called on Palestinian journalists to carry on revealing Israeli crimes against Palestinian civil protests. He also stressed the importance of documenting Israeli crimes in order to file them with the <a href="">International Criminal Court (ICC).
http://imemc.org/article/ten-palestinian-j...
Add Your Comments
Support Independent Media
We are 100% volunteer and depend on your participation to sustain our efforts!