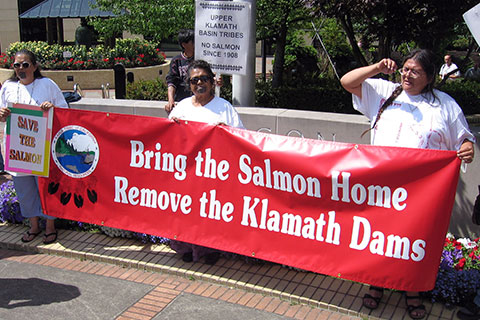 Fishery scientists are expecting a record low return of fall-run Chinook salmon to the Klamath River this year, due to a combination of several years of drought, water diversions in the Klamath Basin and to the Sacramento River and the continued presence of the PacifiCorp dams. Tribal, commercial and recreational fishermen are currently waiting for the decision by the Pacific Fishery Management Council (PFMC) on the fishing seasons at its meeting in Sacramento on April 10, but the outlook is dismal, based on the low Klamath salmon estimates.

Commercial fishermen and families and sport anglers are facing an “unmitigated disaster” in the Klamath Management Zone (KMZ) of the ocean extending from Humbug Mountain, Oregon to Horse Mountain, California, according to Noah Oppenheim, Executive Director of the Pacific Coast Federation of Fishermen’s Associations. This disaster takes place as Governor Jerry Brown continues to move forward with a Delta Tunnels project that will not only hasten the extinction of Sacramento River Chinook salmon, Central Valley steelhead, Delta and longfin smelt and green sturgeon, but will further imperil the salmon and steelhead fisheries of the Klamath and Trinity rivers.

For the Yurok Tribe, who have fished the Klamath for thousands of years, the looming closure will also be an “unprecedented disaster,” according to Amy Cordalis, the Tribe’s General Counsel, a Yurok Tribe member and fisherwoman. Her family lives and fishes in Requa at the mouth of the Klamath River. “This is the worst year in history for Klamath salmon,” said Cordalis. “There is no mystery as to why. The effects of an unprecedented drought were exacerbated by dams and diversions. This year, Yurok, Karuk and Hupa people will have little to no salmon for the first time in history. Although the fish are important economically, they are more important as an irreplaceable part of our identity as people who care for the river.”